CHINA China expected to have largest number of donors

China expected to have largest number of donors 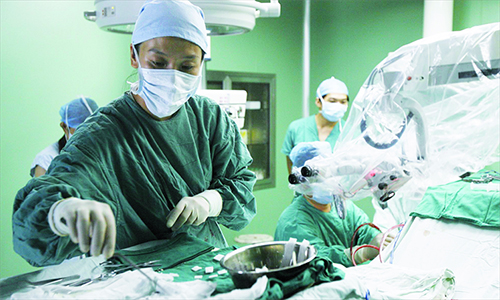 A revised regulation of China's top health body requires a third-party witness for procuring organs from voluntary donors in China, and the procurement should only be carried out at medical institutions.  A Red Cross Society organ coordinator is required to witness the procurement, read the regulation on organ procurement and distribution posted on the National Health Commission (NHC) website on Monday. Though such a practice has already been introduced at medical institutions, the regulation is the first national-level legal document in China to require a third-party witness for organ procurement, Huang Jiefu, former Chinese vice minister of health, told the Global Times on Tuesday.The Red Cross Society's wide network in Chinese cities and counties, as well as the organization's mission to promote humanitarianism, makes it the best choice as a third-party witness, said Huang, who heads the National Human Organ Donation and Transplant Committee. To better fulfill its duties, the society needs to train more coordinators with better health and legal knowledge of organ donation, said Huang. If the witness fails to report illegal practices, they should also be held accountable, Huang said.  Wang Haibo, head of China's official organ distribution system, China Organ Transplant Response System (COTRS), said the requirement aims to make the donation more open and transparent.Public trust is the foundation of China's organ donation cause and a third-party witness is an important part of building and maintaining trust, Wang said. The regulation said donated organs must be distributed through COTRS for the donation to be traceable. No distribution bypassing the system is allowed.It also bans the procurement of organs outside medical institutions.Violating the regulation will lead to the disqualification of doctors or hospitals and criminal investigation and charges, the regulation said.According to Huang, weak law enforcement is the biggest challenge to China's efforts to combat organ trafficking.The regulation offers a legal basis for law enforcement bodies and public security officials to join health authorities in supervising and fighting illegal practices, Huang said. The regulation takes effect on March 1.By the end of 2018, over 21,000 Chinese had voluntarily donated their organs after their death. In 2018 alone, 6,316 Chinese voluntarily donated their organs after dying, and the number is expected to rise by 20 percent in 2019, which means China may have over 7,500 deceased donors this year, Huang said. With around 2,500 donations from living donors to their relatives, China is expected to have the largest number of donors in the world in 2020, said Huang.As of December 2018, over 905,000 Chinese said they are willing to be an organ donor at China's official organ donation platforms, according to the China Organ Donation Administrative Center's website. In 2018, 36,527 organ transplants were performed in the US and 10,721 people provided one or more organs for transplants as deceased organ donors, according to UNOS, the US' organ distribution system.