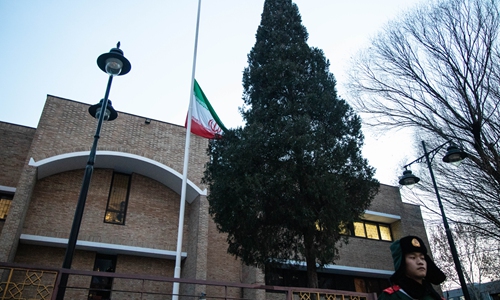 The Iranian Embassy in Beijing flies its flag at half-staff for major general Qasem Soleimani on Monday. (Photo: Global Times)

Iran-US tension could affect China's overseas interests in the Gulf and its significant cooperation with Iran and Iraq, Chinese experts warned on Monday, urging the Chinese government to make diplomatic efforts to prevent any further escalation.

The Iranian Ambassador to China told the Global Times on Monday that Iran is able to protect China's interests "at present," and that Tehran hopes Beijing plays a "constructive role" in the tension caused by the assassination of Iranian major general Qasem Soleimani in a US airstrike.

"We hope China can use international platforms, such as the UNSC, to play a constructive role in the current situation," he said.

Chinese Ministry of Foreign Affairs spokesperson Geng Shuang said at a routine press conference on Monday that "China noted that the Iranian permanent representative to the UN sent letters to the UNSC president and the Secretary-General.

"The military adventurism of the US has breached the basic norms governing international relations and triggered greater tensions and turbulence," Geng said. As a permanent member of the UNSC, China will, in an objective and fair spirit, continue to work with other parties to uphold international law, international justice as well as peace and security in the region, Geng said.

Keshavarzzadeh said "We would like to thank the Chinese government and Chinese people for supporting Iran in many cases over the past years." Talking about China's investment in Iran, the Ambassador said Iran and China have established a comprehensive partnership. "Despite rising tensions between Iran and the US, Iran is able to protect China's investment in the country. So far Chinese investment has not been influenced, but if a war breaks out in the region, all countries in the world will be affected."

Asked if China would increase its security presence in the region to protect its interests, Geng didn't directly answer, but noted that China was highly concerned about the situation in the region.

Hua Liming, a former Chinese ambassador to Iran, told the Global Times that China has significant overseas interests, especially energy interests, in Iraq and Iran. "China will focus on the situation and help the two sides prevent further conflicts...At this stage, the diplomatic effort is the best thing that we can do," and it was unlikely China would deploy more forces to the region as that would complicate the situation.

From December 27 to 30, China, Russia and Iran conducted their first-ever joint military naval drill in the Gulf of Oman, which Chinese analysts said sent a signal to the US that China and Russia stood with Iran to safeguard regional peace and stability.

Geng said at the conference that "We call on relevant parties to exercise restraint to avoid further escalation, and return to dialogue and consultation as soon as possible in order to de-escalate tensions…China will continue to make constructive efforts for peace and security in the Middle East and the Gulf."

The US killing of Soleimani is making the Middle East more intense and complicated as the Iraqi parliament passed a resolution calling on the government to expel foreign troops from the country, Aljazeera reported on Monday.

In an extraordinary parliamentary session on Sunday, parliament called on the government to cancel its request for assistance from the US-led coalition which had been working with Baghdad to fight the Islamic State of Iraq and the Levant.

The assassination of the Iranian major general showed Washington's strategy in the Middle East had failed and proved the incompetence of the US to handle the situation, said Jin Canrong, associate dean of Renmin University of China's School of International Studies in Beijing.

"This kind of decision-making shows that the US has no better option or is unable to deal with Iran and different forces in Iraq with more reasonable and low-cost approaches," Jin said.

Small explosions have in recent days occurred in the Green Zone of Baghdad, where the US Embassy is based, AP reported. US military bases in Iraq and Kenya were attacked by Al-Shabab, but no evidence connected the attacks to Iran.

Iran's Supreme Leader Ayatollah Ali Khamenei led crowds in prayers in Tehran on Monday at the funeral of slain Soleimani and the massive crowds consisted of hundreds of thousands of people chanting "Death to America," Reuters reported.

Hua said that he witnessed the outrage among Iranian people against the US during the 1979 Islamic Revolution.

"What is happening in Tehran now reminds me of that age, which is unprecedented since 1979," Hua said.

Before the air-strike, Iranian people might have had some complaints about their livelihood and economic issues with the government, but the death of Soleimani has escalated anti-US emotions to the highest level, Hua said.

"Compared to the hatred of the US, all dissatisfactions with their own government have been laid aside," Hua said.

To appease that anger, Tehran must retaliate, Hua said, but it was unlikely to recklessly attack US targets.

More likely Iran would cautiously react with "the right countermeasures with suitable timing, so that it can prevent unnecessary escalation and minimize the cost," Hua said.