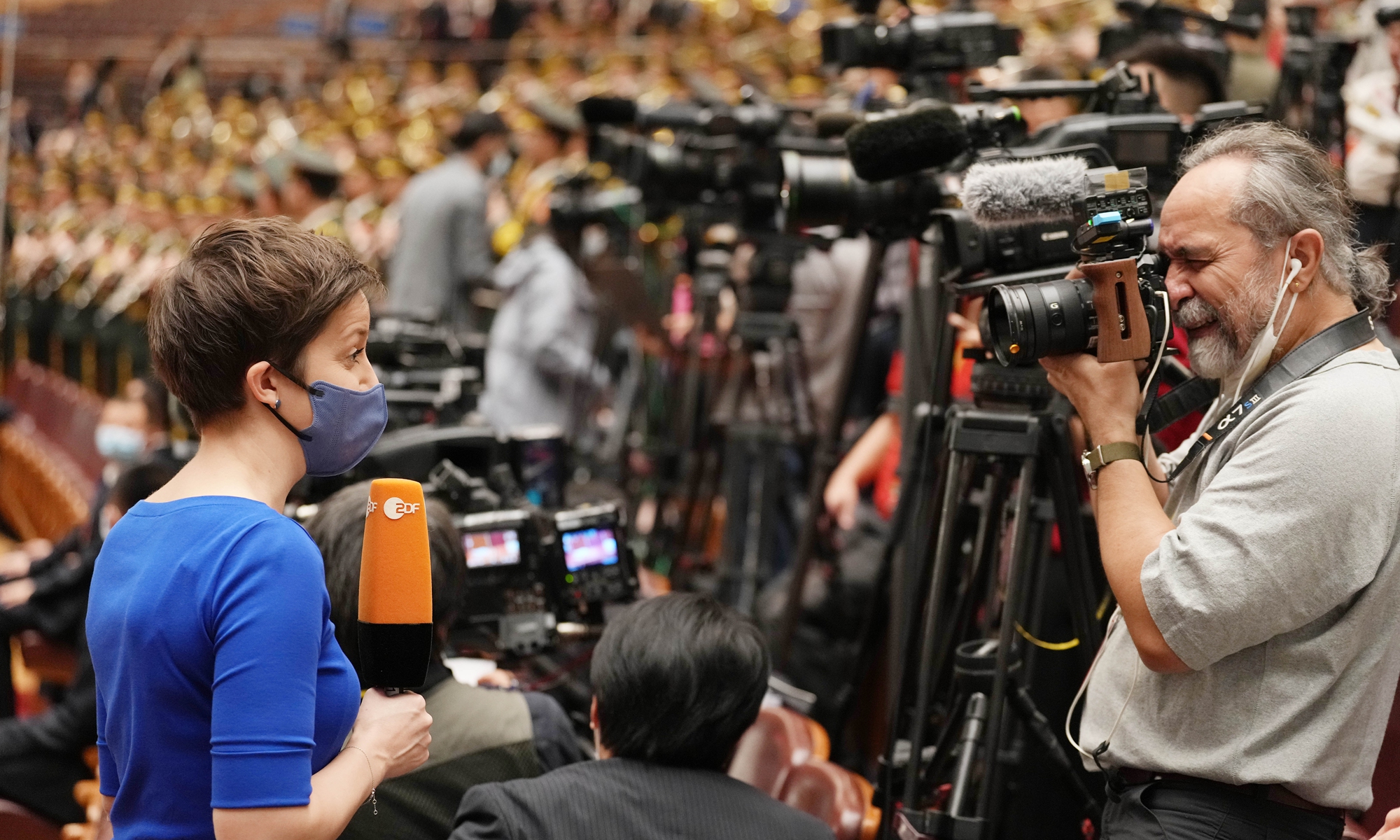 Journalists make on-the-spot coverage of the 20th National Congress of the Communist Party of China which opened at the Great Hall of the People in Beijing on October 16, 2022. (Photo: cnsphoto)

China on Sunday expounded the country's indigenous approach to achieving modernization, as the Communist Party of China (CPC) set its sights on leading national efforts to accelerate the creation of a new development pattern and pursue high-quality development.

Scientific socialism has manifested new vitality in China in the 21st century and the Chinese-style modernization has provided a new option for mankind to realize modernization, Xi Jinping said on Sunday in a report at the opening session of the 20th CPC National Congress.

"From this day forward, the central task of the CPC will be to lead the Chinese people of all ethnic groups in a concerted effort to realize the Second Centenary Goal of building China into a great modern socialist country in all respects and to advance the rejuvenation of the Chinese nation on all fronts through a Chinese path to modernization," he said.

The keenly watched Chinese path is envisioned to navigate the economy through the bruises and scars - exemplified by the prolonged pandemic, geopolitical tensions and drastic monetary tightening - that have left a mess behind for the Western world, experts said. As the key CPC Congress anchors the country toward greener, fairer, more secured and innovative growth in the years to come, the global economy will hinge its future on a prosperous China more than ever, they stressed.

The Chinese path to modernization, one of the key takeaways from Xi's report to Sunday's opening session, almost instantly became a buzz phrase that reverberated across the world.

Tian Yun, former vice director of the Beijing Economic Operation Association, told the Global Times on Sunday that the opening speech flagged Chinese-style modernization for the first time and pinpointed it as the core mission of the CPC on the new journey of the new era.

"The 19th CPC National Congress mapped out a direction Chinese-style modernization was supposed to head but the concept still remains vague. Since it is very hard to materialize modernization in the context of World Bank technical standard, giving the unique situation and characters of Chinese economy, the report delivered on Sunday gives the concept an extension and an upgrade in connotation," Tian said.

In his remarks to the opening session on Sunday, Xi said that China stands firmly against all forms of hegemonism and power politics, the Cold War mentality, interference in other countries' internal affairs, and double standards.

China adheres to the right course of economic globalization. It is committed to working with other countries to foster an international environment conducive to development and create new drivers for global growth, Xi said.

The five aspects encapsulated in the definition of Chinese-style modernization lay out the guiding principles of China's march toward the second centennial goal and when such target is achieved, it could mark an unprecedented achievement in the history of mankind and "a fundamental turnaround in global landscape," Yao Jingyuan, special researcher of the Counselors' Office of the State Council, told the Global Times on Sunday.

"China is home to 1.4 billion people, which is more than the combined population of all modernized countries [by current definition]. That means when China reaches its second centennial goal, it will be a modernized economy with the largest population in the world," Yao said.

Another major difference of Chinese modernization with Western economies is its emphasis on common prosperity, a stark contrast to the modernization path taken by Western countries which led to widening gaps between the rich and poor, and the inequality in social development, Yao noted.

He further said that Chinese-style modernization is characterized by peaceful and green development, "unlike how some modernized countries boom at the tears and bloods of the developing world - through invasion, colonization and exploitation, or at the cost of destroying natural resources and emitting carbon dioxide at sky-high levels that fuels global warming."

"I believe that the decisions made at the 20th Party Congress will be a worthy response to the challenges of the modern world and will determine the course of China's socioeconomic development not only for the next five years, but also, as is customary in China, for the longer term," Belarusian Ambassador to China Yuri Senko told the Global Times over the weekend.

In the five years since the 19th Congress, the socioeconomic agenda in China has undergone quite noticeable changes, which was due to a number of objective reasons - the coronavirus pandemic, the growing competition with developed countries in the field of high technology against the background of geopolitical confrontation with certain Western countries such as the US, the ambassador said.

To advance rural revitalization across the board, China will continue to put agricultural and rural development first, consolidate and expand achievements in poverty alleviation, and reinforce the foundations for food security on all fronts.

Furthermore, the CPC will work hard to resolve the pressing difficulties and problems that concern the people most, improve the basic public service system to raise public service standards and make public services more balanced and accessible, so as to achieve solid progress in promoting common prosperity, Xi said.

China will improve the system of income distribution, he said. "We will ensure more pay for more work and encourage people to achieve prosperity through hard work. We will promote equality of opportunity, increase the incomes of low-income earners, and expand the size of the middle-income group," Xi said.

Proposed amid profound changes unseen in a century, Chinese-style modernization keeps abreast of the trend of the times and fits the requirements of China's own development as the world's largest developing country, Wan Zhe, an economist and professor at the Belt and Road School of Beijing Normal University, told the Global Times on Sunday.

"With aims including common prosperity for all, harmony between humanity and nature and peaceful development, Chinese-style modernization is of no fundamental difference to other countries, but underscores China's own context and socialism with Chinese characteristics," Wan said.

Cao Heping, an economist at Peking University, said that Chinese-style modernization is unique in having the CPC at its core, as the Party has always been committed to people-centered development philosophy while learning modernization from others.

After the 20th National Congress, the country will likely ramp up efforts in three important areas, namely the development of real economy, improvement in the system of income distribution and grain security, according to Wan.

"Reiterating security and green development, the authorities will attach importance to making breakthroughs in cutting-edge technologies, while improving the resilience and capability of industrial and supply chains to strengthen the foundation for building a manufacturing power and provide our own solution for restructuring of international industrial chains," she said.

As the Chinese leadership vows for equality of opportunity, it's expected that the central government will step up financial market regulation underpinned by a sound legal framework, with focus on behaviors that threaten equality and systemic security, economists reckoned.

Among Sunday's highlights was also a call to keep education, technology and talent on the front burner when it comes to mapping out the path to modernization.