CHINA China expresses regret over US reimposing sanctions on Iran

China expresses regret over US reimposing sanctions on Iran 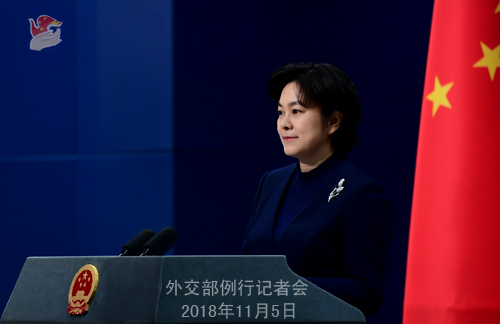 China expressed regret over the US' decision to re-impose sanctions on Iran, a Foreign Ministry spokesperson said Monday.According to reports, the Trump administration announced last Friday that it would re-impose sanctions on Iran that had been lifted under the historic 2015 Iran nuke deal, also known as Joint Comprehensive Plan of Action (JCPOA). The sanctions, the second batch of its kind, would take effect on Monday.Spokesperson Hua Chunying told a daily news briefing that China regrets that the U.S. made this decision, and society at large has shown widespread opposition to unilateral sanctions and long-arm jurisdiction."The JCPOA is a multilateral agreement that is approved by the United Nations Security Council, which should be fully and effectively implemented, and is helpful in safeguarding the international nuclear non-proliferation regime and the peace and stability of the Middle East," said Hua.She said that although the situation had changed a lot in the past six months, relevant parties of the JCPOA were still devoted to keeping the agreement and maintaining normal trade and economic cooperation with Iran, which was widely supported by the global society.The International Atomic Energy Agency (IAEA) had confirmed in 12 consecutive reports that Iran is abiding by its commitments under the agreement, she said, adding China commended Iran's efforts.China hoped that all parties concerned could fulfill their responsibilities and obligations from an overall and long-term perspective, she said. China will continue to uphold a fair, objective and responsible attitude and continue to make unremitting efforts to maintain the agreement, while also firmly safeguard its legitimate rights and interests.