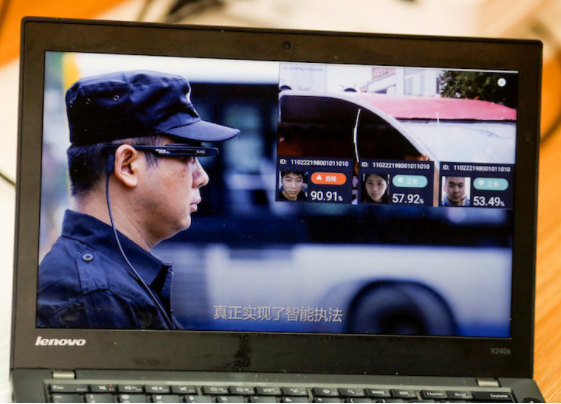 At a highway check point on the outskirts of Beijing, local police are this week testing out a new security tool: smart glasses that can pick up facial features and car registration plates, and match them in real-time with a database of suspects.

The AI-powered glasses, made by LLVision, scan the faces of vehicle occupants and the plates, flagging with a red box and warning sign to the wearer when any match up with a centralized “blacklist”.

The test - which coincides with the annual meeting of China’s parliament in central Beijing - underscores a major push by China’s leaders to leverage technology to boost security in the country.

That drive has led to growing concerns that China is developing a sophisticated surveillance state that will lead to intensifying crackdowns on dissent.

“(China’s) leadership once felt a degree of trepidation over the advancement of the internet and communication technologies,” said David Bandurski, co-director of the China Media Project, a media studies research project at the University of Hong Kong.

“It now sees them as absolutely indispensable tools of social and political control.”

Wu Fei, chief executive of LLVision, said people should not be worried about privacy concerns because China’s authorities were using the equipment for “noble causes”, catching suspects and fugitives from the law.

“We trust the government,” he told Reuters at the company’s headquarters in Beijing.

Reuters was able to verify that the glasses were being used in tests by the police to help identify suspect individuals and vehicles in the Beijing area in recent days.

China, under President Xi Jinping, is making a major push to use artificial intelligence, facial recognition and big data technology to track and control behavior that goes against the interests of the ruling Communist Party online and in the wider world.

Xi is expected to cement his power base this weekend as a reform to remove term limits is pushed through. That would in effect allow him to stay in his post indefinitely.

Delegates and visitors entering the Great Hall of the People, the venue for the parliament, the National People’s Congress, have to go through facial scanners. The same happened to those attending the related advisory body, the Chinese People’s Political Consultative Conference.

“This year, security at the two sessions has some freshly-baked ‘black tech’ coming online,” wrote the state-run Science and Technology Daily newspaper, using a comic-book term in China for futuristic surveillance gadgets.

The paper said cameras at the event had been upgraded to capture, analyze and compare suspicious faces in around two seconds, powered by a system called “Skynet” - which has a national database of blacklisted individuals.“The plot of sci-fi film ‘Minority Report’ is now basically becoming a part of daily life,” the newspaper added, referring to the Tom Cruise movie set in a futuristic society where crimes are solved and punished before they even happen.