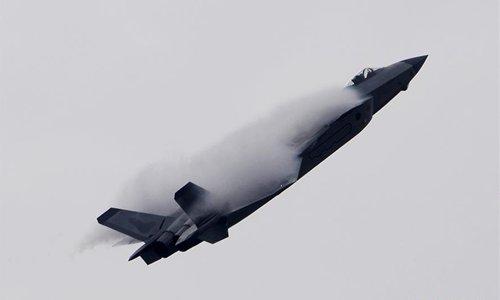 China's sixth-generation fighter will come into being by 2035 or earlier, said Wang Haifeng, a chief architect at Chengdu Aircraft Research and Design Institute who also participated in the development of the J-20 and J-10, reported Ordnance Industry Science Technology, a Xi'an-based periodical on national defense industries, in January.Some new features of a sixth-generation fighter jet include the ability to command drones, artificial intelligence and even higher stealth capability through aerodynamic design, the periodical reported.New technologies, such as laser, adaptive engines, hypersonic weapons and swarm warfare, might also be part on the new aircraft, Wang said, noting that China will choose some of these features and add others that best suit China's needs.France and Germany announced that they will jointly build a next-generation combat jet system, which is expected to be operational by 2040, Reuters reported last week.The UK unveiled its sixth-generation fighter jet development program named Tempest in July 2018, and will invite India to join its co-development aircraft program, the Business Standard reported on Friday.Other countries including the US, Russia and Japan are also reportedly developing their own sixth-generation fighter jets. Although they remain in the concept stage, the new fighters are likely to emerge in the 2030s or 2040s, the National Interest reported.A generation gap means the sixth-generation warplanes would easily top fifth-generation ones including the US' F-22 and China's J-20, analysts said.Although China has yet to officially reveal a plan on its next-generation fighter jet, which hardly comes as a surprise as the country seldom announces any in-development weaponry, it may have already started related research and development, a Beijing-based military expert who asked not to be named told the Global Times on Monday."China's tradition is to have one generation in service, a new one in development and a next-generation under study. Now that the J-20 is already in service, the development for a new aircraft is also underway," the expert forecast.The generational standards for fighter jets have been defined mainly by Western countries but not future standards, said J-20's chief designer Yang Wei in a China Central Television program, noting that China will design very different aircraft in the future through true innovation.China has also constructed a 6,620-ton, 17,000-cubic-meter FL-62 continuous transonic wind tunnel that will be critical in "shaping China's future fighter jet," said a statement released by the Aviation Industry Corporation of China in September.