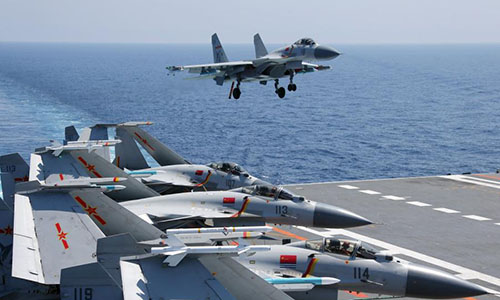 A J-15 fighter jet prepares to land on the flight deck of the Liaoning aircraft carrier.  (Photo: Global Times)

More than 4,500 people have passed initial selection in China's annual recruitment of aircraft carrier cadet pilots, almost twice as many as last year.With China's second aircraft carrier widely expected to join the People's Liberation Army (PLA) Navy this year, the recruitment campaign is designed to ensure personnel to meet the needs of the aircraft carrier-borne fighter jet J-15. The comprehensive examination phase of the 2019 annual recruitment campaign for aircraft carrier cadet pilots started in January and is due to conclude in April. Students will undergo physical and psychological tests and political examinations, the PLA Navy's website navy.81.cn reported on Sunday.This year's physical exams added a series of tests that pilots of carrier-borne aircraft need to pass including vision and auditory tests on candidates' vestibular function, corneal topography and stereovision, the report said.More than 4,500 students who passed enrollment exams will participate in the next phase, the report said.During the same recruitment campaign last year, about 2,600 students made it to the comprehensive examination phase, according to the recruitment campaign's website. That number was then cut to 800 before the final selection. It is unknown how many were eventually enrolled in last year's cadet pilot program. China's second aircraft carrier, the Type 001A, is widely expected to be delivered to the PLA Navy this year, and China will have a fleet of five to six carriers by the 2030s, reports said.While the Liaoning and the Type 001A, China's first and second aircraft carrier, can each carry about 30 fighter jets, future carriers may be designed to carry more than 60, a Beijing-based military expert, who asked not to be named, told the Global Times on Monday.More pilots than fighter jets are needed to ensure an aircraft carrier's full combat capability, the expert said, noting that not all students who pass the examinations can become pilots capable of flying carrier-borne fighter jets which is a job that comes with "extremely high difficulty."China currently operates the J-15 single-seat fighter jet on the Liaoning, but the country has reportedly recently developed a two-seat version of the J-15, which experts say could outperform the original version in electronic combat but at the cost of mobility and payload weight.The extra seat can also be used to train new pilots, cctv.com reported.Looking to the future, future carriers are expected to be equipped with an electromagnetic catapult to launch aircraft instead of the conventional jump-rack deck. The new technology allows heavier aircraft to take off.China's next generation stealth fighter jet FC-31 and airborne early warning aircraft KJ-600 are likely to be part of the new carriers' fleet of aircraft, experts said.Li Jie, a Beijing-based naval expert, told the Global Times that China will develop a new set of training methods as the technology and equipment make the shift in the coming years.Talented pilots who have mastered the J-15 may also learn to fly new aircraft, Li noted.