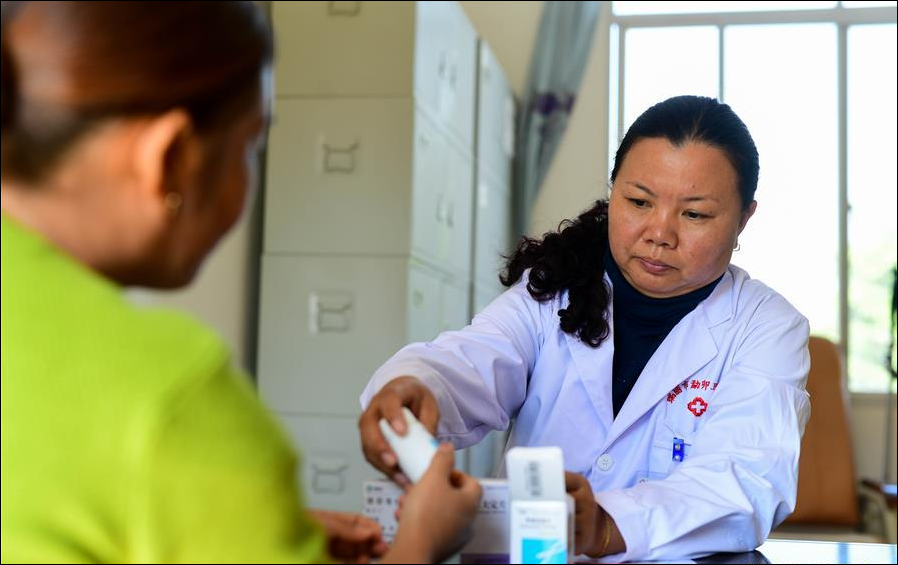 A doctor hands over drugs to an HIV-infected patient in a village clinic in Ruili, southwest China's Yunnan Province, Nov. 29, 2018. (Photo: Xinhua)

When Ai Yue, using a fake name to remain anonymous, was confirmed to have contracted HIV/AIDS 13 years ago, he was devastated and kept wondering how many days he would have left.

"HIV/AIDS was a taboo at that time," said the 45-year-old farmer, "Knowing I had the disease, people would simply walk away when they saw me and some thought they could be infected by my saliva if we talked."

The disease led to many sleepless nights for Ai's family, who are living in Gengma County in southwest China's Yunnan Province. Luckily, his wife and children tested HIV/AIDS negative.

As Ai received antiretroviral therapy and free consultation services from local authorities, the family gradually came out of the shadow and tried to live a normal life.

By the end of October, Yunnan had 105,600 people living with HIV/AIDS, or about one-eighth of China's total. For years, Yunnan has been at the forefront of the country's tough battle against the epidemic.

Around every nine in 10,000 people are living with HIV/AIDS in China, a low rate compared to other countries, according to the National Health Commission.

According to a joint evaluation by the Chinese Center for Disease Control and Prevention, UNAIDS and the World Health Organization, there are around 1.25 million people living with HIV/AIDS in China by the end of this year, and 80,000 newly-infected people every year.

Since 2005, four rounds of campaigns to fight HIV/AIDS have been launched in China, with a stable HIV/AIDS prevention and testing network established in both urban and rural areas, which mainly focuses on treatment for families and communities.

Community doctors, social workers and government officials would visit HIV/AIDS patients, such as Ai, on a monthly basis, reminding them about the importance of continuing medication and adjusting their drugs based on the regular checkups.

"These grassroots forces have also explained to villagers that with the help of medication, HIV/AIDS can be controlled as a chronic disease, so that the HIV carriers, especially those suspected of infection, can ease their worries and actively engage in timely treatment," said Su Yuhong, head of the HIV/AIDS prevention office in Gengma.

In this county that borders Myanmar, about 2,500 people are living with HIV/AIDS.

For more than a decade, explaining HIV/AIDS knowledge to every villager, mobilizing them to do HIV/AIDS testing and coordinating the infected to receive antiretroviral therapy has been part of Su's daily routine.

"We have to ensure full coverage of HIV/AIDS knowledge and HIV/AIDS testing for every villager, making them at least understand that using condoms is responsible behavior and that HIV testing is an ordinary thing just like an annual health check," she said.

For those that tested HIV/AIDS positive, Su and her team would inform them immediately and provide a one-on-one explanation of therapeutic plans outside the village, which fully protects their privacy.

Efforts have also been made to strengthen HIV/AIDS education in communities, as it is "one of the best ways of prevention."

"Exhibition boards, posters, brochures, and training classes...We use everything to make the villagers familiar with HIV/AIDS knowledge," Su said.

Over the years, Su now talks to villagers by going door to door.

"At first, nobody accepted our free distribution of condoms and few would stop to read our posters. But now, when talking about HIV/AIDS, even the most illiterate can hit the nail on the head, and almost all families know how to block mother-to-child transmission," according to Su.

Family-based treatment is the basis to guarantee the long-term battle against HIV/AIDS, according to Lu Lin, deputy director of Yunnan's provincial health commission.

HIV self-test kits can be bought in some drugstores in Yunnan, allowing people to test for HIV infection via saliva samples in about 20 minutes. Also, convenient HIV urine test kits can be found in some universities in the province.

"The 'full coverage' mode has yielded results. The HIV detection rate has risen to more than 84 percent this year, compared with just 58 percent in 2010," Xu said.

The province recorded 9,413 new HIV/AIDS infections from January to October this year, down 2.6 percent year on year, a downward trend for five consecutive years. "The disease remains stable and under control," according to Xu.

Yunnan is confident it will reach the goal proposed by the United Nations' program on HIV/AIDS: to ensure that more than 90 percent of HIV-infected patients know about their infections, 90% of people who are diagnosed are on antiretroviral treatment and 90% of those who receive the antiretroviral will have their viruses suppressed by 2020, Xu added.

"Though with a large HIV/AIDS population in China, Yunnan has transformed itself from one of the hardest-hit provinces to a demonstration area of prevention and treatment through years of efforts, " said Wu Zunyou, chief epidemiologist of the Chinese Center for Disease Control and Prevention.

Villagers in Gengma County are now very proactive about anti-AIDS work, believing that this is not only beneficial for themselves, but for future generations as well.

"Gradually, people who once looked down upon me have accepted me back into their lives as a normal person," Ai said. "These days, they often ask me to help them farm and invite me over for dinner sometimes."