BEIJING, Dec. 21 (Xinhua) - China on Friday voiced firm opposition to the United States' smearing accusations on the cybersecurity issue, urging the US side to withdraw the so-called "charges" against related Chinese citizens.

The remarks came as Foreign Ministry spokesperson Hua Chunying responded to charges by the United States against two Chinese citizens Thursday for having allegedly carried out "cyber theft." 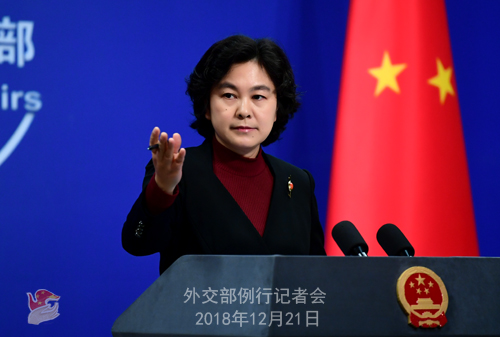 She said that the accusation by the US side on the issue of cybersecurity is fabricated "out of thin air," which seriously violates basic norms governing international relations and seriously undermines bilateral cooperation. This is vicious in nature.

Hua said that China firmly opposes these allegations and has lodged stern representations with the United States.

On the issue of cybersecurity, Hua said the stance of the Chinese government has always been consistent and clear. China staunchly champions cybersecurity, and firmly opposes and cracks down upon any form of cyber espionage.

"The Chinese Government has never in any way participated in or supported anyone's behavior of stealing commercial secrets," she said.

She said that it's been an open secret that for a long time, US authorities have exercised large-scale and organized cyber espionage and monitoring over foreign governments, enterprises, and individuals.

"Slamming groundless accusations against China under the pretext of cyber theft is no more than a self-deceiving act of blame-shifting," she said.

"We urge the United States to immediately correct its wrongdoings, stop smearing China on the cybersecurity issue, and withdraw the so-called charges against related Chinese personnel," Hua said, adding that China will take necessary steps to resolutely safeguard its cybersecurity and interests.

In response to the smearing remarks from the United Kingdom lashed upon China on the cybersecurity issue, Hua tagged them as "groundless" and "out of ulterior motives."

"We urge them to respect facts and stop the deliberate slandering of China, to avoid damaging their bilateral relations with China and related cooperation in important sectors," she added.