Chinese people don't go looking for trouble, but nor do they fear it, Chinese Foreign Ministry spokesperson Zhao Lijian said, in response to the Hong Kong-related statement made by the "Five Eyes Alliance", at a routine press conference on Thursday. 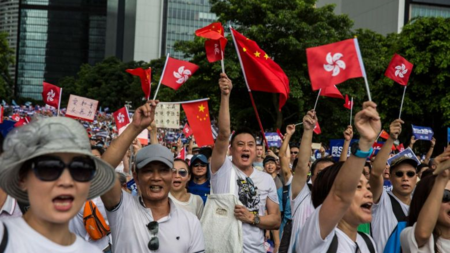 A statement signed by the foreign ministers of the UK, US, Canada, Australia and New Zealand – also known as the Five Eyes Alliance – expressed "serious concern" after Beijing ordered the expulsion of four opposition MPs from the Hong Kong parliament.

The Chinese people don't go looking for trouble, but nor do they fear it. No matter how many eyes the "Five Eyes Alliance" have, as long as they dare to undermine China's sovereign security and development interests, their own eyes could be poked blind, Zhao said.

He expressed strong dissatisfaction and firm opposition to relevant countries' flagrant violation of international law and Basic Principles of International Relations and their finger-pointing over Hong Kong affairs, which are China's internal affairs.

In accordance with the Constitution of China, the Basic Law of Hong Kong and the Hong Kong National Security Law, the Standing Committee of the National People's Congress has made the legal and reasonable decision on the qualifications of members of the Legislative Council of the HKSAR, which is an inevitable requirement for upholding and improving the "one country, two systems" policy. This cannot be challenged, Zhao said.

As an English proverb goes, "the proof of the pudding is in the eating", there is a similar saying in China that "only the feet know whether the shoes fit or not." Since the implementation of the Hong Kong National Security Law, there has been no more "beautiful sight to behold" in Hong Kong. This is a great proof to the real fact, he said.

Meanwhile, Zhao noted that public officials must uphold their country's constitutional laws and be loyal to the motherland. The HKSAR is an inseparable part of China. All Chinese people, including Hong Kong compatriots, will never be allowed to advocate the idea of Hong Kong independence or seek intervention in Hong Kong's affairs by overseas forces.

It is an undeniable fact that since Hong Kong's return, China's central government has governed Hong Kong in accordance with the Constitution and the Basic Law, and the rights and freedoms enjoyed by Hong Kong residents are fully guaranteed, Zhao stressed.

"Relevant countries should face up to the fact that Hong Kong has returned to China. They need to abandon double standards, and earnestly respect China's sovereignty, and immediately stop interfering in Hong Kong affairs and China's internal affairs in any form. Any attempt to put pressure on China and undermine its sovereignty, security and development interests will not succeed," Zhao said.