China firmly opposes external intervention on issues related to Taiwan and other domestic affairs, Chinese State Councilor and Minister of Foreign Affairs Wang Yi said in his remarks at the Foreign Ministry's 2019 New Year Reception held in Beijing on Thursday. 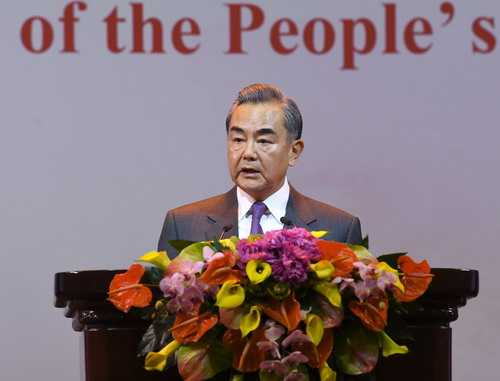 Wang stressed that in 2019, "We will continue to uphold the one-China principle, safeguard our national sovereignty, security and development interests, and reject any external intervention or provocation on issues related to Taiwan, Hong Kong, Macao, Xinjiang, Tibet and maritime affairs."

"We will stand up for our development rights in economics, science and technology, innovation and other fields, and oppose any unilateral moves or bullying against China," he added.

Wang said that China will continue to follow peaceful development, the overarching direction of China's foreign policy, to advance cooperation with all relevant parties for win-win results, and to safeguard an international order underpinned by multilateralism.

In his speech, Wang also stressed building partnerships and playing a mediating role in regional hotspots in the new year.

"We will continue to serve China's reform and development," said Wang, adding that promoting China's development is an inherent goal of China's diplomacy.

Over 400 guests including foreign diplomats and representatives of international organizations as well as Yang Jiechi, a member of the Political Bureau of the Communist Party of China (CPC) Central Committee and director of the Office of the Foreign Affairs Commission of the CPC Central Committee, attended the reception.