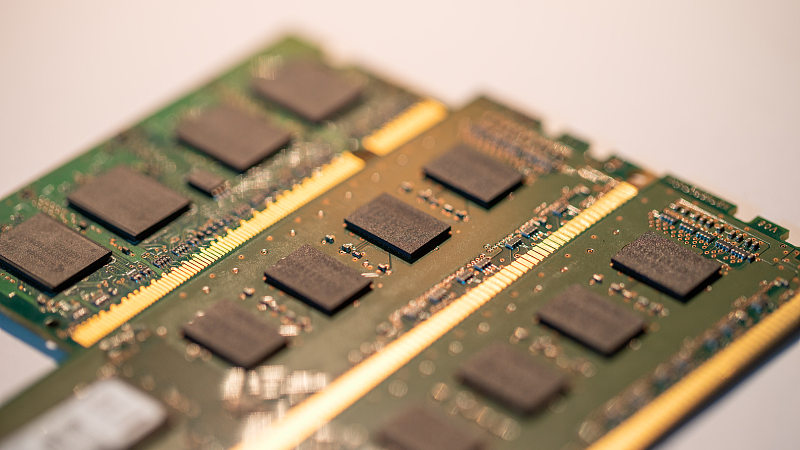 A photo of a semiconductor chip. /CFP

China is firmly opposed to the U.S.' newly-passed CHIPS bill as it could hurt technological development on both sides, Chinese Foreign Ministry spokesperson Zhao Lijian said at a press briefing on Thursday.

"The so-called CHIPS and Science Act is purportedly aimed at bolstering the competitive edge of the U.S.' sci-tech and chip industries," Zhao said. "However, certain provisions in the act restrain normal sci-tech cooperation between China and the U.S. China is firmly against it."

The U.S. Senate passed a bill on Tuesday, known as the CHIPS-plus or Chips and Science Act, to dramatically boost U.S. semiconductor manufacturing.

It is up to the U.S. how it wants to develop itself, Zhao stressed "but it should by no means create hurdles for normal technological and people-to-people exchanges and cooperation with China, still less deprive China of or undermine China's legitimate development rights and interests."

Zhao said China-U.S. science and technology cooperation serves the interests of both sides and promotes the progress of humanity. "Imposing restrictions and seeking decoupling will only hurt others and oneself alike."

"China stresses reliance on our own efforts to drive the nation's development. No restriction or suppression will hold back China's sci-tech development and industrial progress," Zhao noted.

The U.S.' newly-passed legislation provides about $52 billion in government subsidies for U.S. semiconductor production as well as an investment tax credit for chip plants, estimated to be worth $24 billion. The bill will move to the House later this week and U.S. President Joe Biden for approval.

The legislation prohibits companies which take new grants to build plants in U.S. for expanding their semiconductor manufacturing in China for a decade, according to Bloomberg.

Wang Peng, a research fellow at the Beijing Academy of Social Sciences, said the U.S. is using the bill "to force companies in countries and regions of key status on the global chip supply and industrial chains to play by U.S. rules, as well as encircling and suppressing chip industries in emerging markets," according to Global Times.

Another expert Gao Lingyun, pointed out the bill is eyeing containing China's development and giving an edge to U.S.' technological advance.

Xiang Ligang, director-general of the Beijing-based Information Consumption Alliance, told Global Times that some large U.S. companies could face more losses if they give up the Chinese market than what they will gain from government subsidies.

Xiang gave an example of U.S. chipmaker Intel, saying that it's unlikely to give up the Chinese market entirely which takes up for 20-30 percent of its total annual revenue.

According to a report from Politico, Intel and its peer companies are lobbying to curtail limitations on their operations in China.