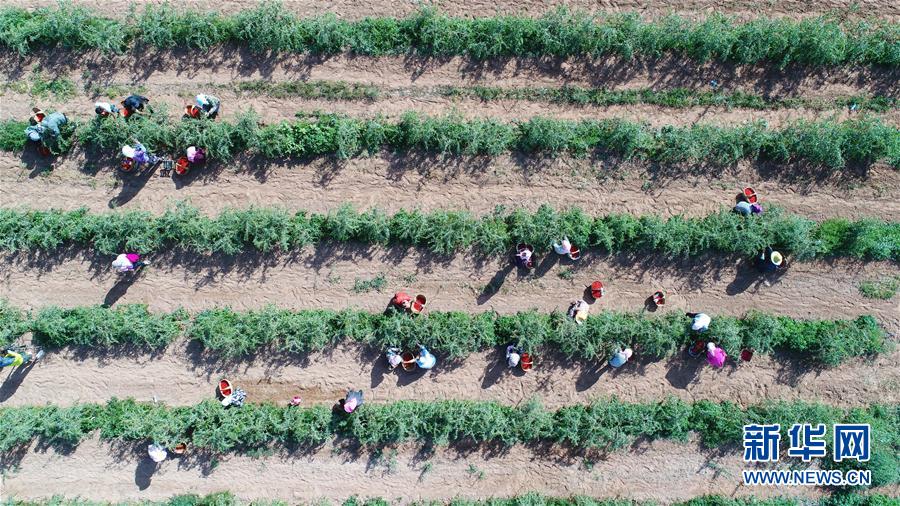 Xihaigu is a largely mountainous region that was labeled the "most unfit place for human settlement" by the United Nations in the 1970s due to land reclamation, drought, and a fragile ecological environment. The situation was so severe that the region came to be known as China's "poverty king."

On Monday, Xiji, the last poor county in the region, was removed from the list of poverty-stricken counties, marking the end of poverty in all nine poor counties in Xihaigu amid the country's efforts to eradicate absolute poverty by the end of 2020.

"Wiping out absolute poverty in Xihaigu not only fully demonstrates the advantages of China's socialist system but also provides a valuable reference for the global poverty reduction cause," said Li Wenqing, an expert with the Ningxia Academy of Social Sciences.

In the 1980s, China implemented a large-scale program for development-oriented poverty relief in its northwestern regions, and Xihaigu was included.

Since then, technology, funding, workers and policy support have flown into Xihaigu, with the main objective of helping impoverished people to shake off absolute poverty.

Lannitan, which means "muddy pit" in English, is one of the poorest villages in Xiji County. True to its name, dirt roads in the destitute village have existed for centuries.

Due to the terrible living conditions and scarce job opportunities, about one-third of the households in Lannitan have left, and villager Su Xiaoping also planned to move four years ago. "It was too hard to survive. Who wants to leave their hometown to make a living?" Su said.

In 2017, a 10-km road was built, linking the village with the outside world, and also bringing confidence and hope to all remaining villagers. Meanwhile, with the support of the local government, Lannitan began to develop its cattle industry.

Like other villagers, Su was given preferential bank loans and started to raise cows and plant corn. In 2017, he earned over 50,000 yuan (about 7,500 U.S. dollars), bringing his family off the village's list of impoverished households.

In 2018, villagers voted to change the name of their home from Lannitan to Hanjiang, meaning "embracing the water."

The village's experience epitomizes that of Xiji. There were 238 poverty-stricken villages and around 155,000 people living below the poverty line in Xiji in 2014. Today, the number has dropped to zero.

GO OUT AND STAY IN

Relocation has been a key measure for the region to alleviate poverty. Over the past three decades, Ningxia has relocated around 1.23 million people from inhospitable Xihaigu to areas along the Yellow River, China's second-longest river.

Hongsipu District, located in Ningxia's Wuzhong City, was once part of the Gobi Desert, but it has now become one of China's largest settlement areas for people relocated from Xihaigu, with a population of about 230,000, after a section of the Yellow River was raised 300 meters and became a major water source for locals.

Zang Weibing was one of the first batch of villagers moving to Hongsipu in 1999. They planted proso millet in the irrigated fields, never expecting the crop would flourish.

"I've never seen 1-meter-tall proso millet in Xihaigu due to the lack of water," said Zang. "We gained a bumper harvest of proso millet in the first year after we moved here."

Later, Zang started to develop the nursery stock industry and also made a handsome profit. "I'm confident that our life will become better in Hongsipu."

For those choosing to stay in Xihaigu, over 300 poverty-alleviation workshops have provided them with more job opportunities and sustainable sources of income.

Meanwhile, poor households can receive a maximum government subsidy of 20,000 yuan and an average loan of 49,000 yuan to start up a business.

This year, 71-year-old farmer Ma Youshen in Xiji's Piancheng Township raised more cows and sheep with a loan of 200,000 yuan. "With such good policies in place, I'm sure to turn things around," said Ma.

"The supportive policies have motivated more villagers to fight entrenched poverty," said Wang Xuejun, Party chief of Xiji County. "We will offer people as much support as possible to help them live a better life with their own hands."

Xihaigu was an oasis in the Eastern Han Dynasty (A.D. 25-220) until changes to the climate and human activities like excessive logging and land reclamation turned it into an inhospitable area with a fragile ecological environment.

Over nearly two decades, Ningxia has made continuous efforts in returning farmland to forest and grassland and prohibiting grazing, and Xihaigu has turned green once again.

The village of Yangling in Guyuan has also seen the booming tourism sector become its pillar industry. Last year, the village held a tourism festival, attracting over 100,000 tourists in 10 days and pocketing a comprehensive tourism income of over 3 million yuan, said He Dianquan, a village official.

"Some earned up to 7,000 yuan a day by selling snacks, and we are happy to see the good environment begin to generate income for villagers," said He.

"I earned about 5,000 yuan last year, and I'm satisfied with that," Ma said. "This year I developed a new recipe, hoping that visitors from all over the world will enjoy my tea."