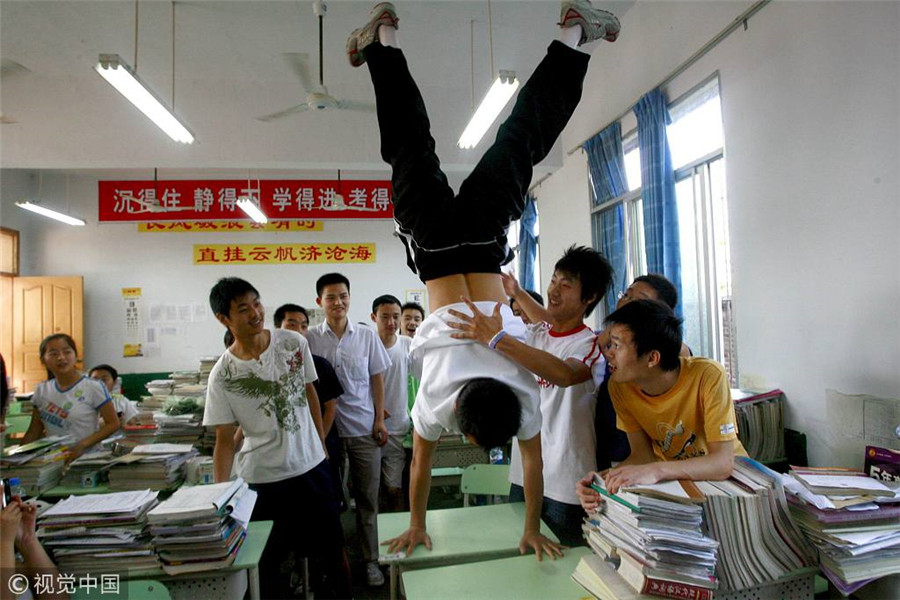 The exam, known as gaokao in Chinese, has changed the lives of tens of millions of people and opened up China's education since it was resumed in 1977.

The exam was disrupted by the Cultural Revolution (1966-76), and its reintroduction by then-leader Deng Xiaoping was a clear signal that times had changed.

It was not easy to organize a nationwide exam in a country where many people still lacked living materials in 1977. The papers that would have been used to print the selected works of Mao Zedong were later used to print test papers for examinees.

In 1977, the exam was taken by around 5.7 million people, including high school graduates, farmers and factory workers.

"Our future is closely associated with the times via gaokao," said Zhao Zhengguo, an academician with the Chinese Academy of Sciences.

Zhao was a factory worker in Central China's Hunan Province in 1977 and was admitted to study physics at the University of Science and Technology of China after completing gaokao in 1978.

The resumption of gaokao showed the country was resolved to reform its talent selection system.

All students, no matter rich or poor, are welcome to take the exam.

Like Zhao, Zhang Pingwen, a professor with the School of Mathematical Sciences of Peking University, still remembers his childhood hawking ice cream on the street to help his family.

"Without gaokao, it would be impossible for many children like me in rural areas to leave our places of birth and engage in scholarship," said Zhang, adding that he had barely dared to imagine his future at that time.

Zhang was admitted by the university in 1984 and conducted ground-breaking research in a number of fields in the ensuing years.

For Yu Minhong, CEO of education company New Oriental, gaokao holds a special place in his heart. He took the exam three times from 1978 to 1980 before being admitted to Peking University.

"The resumption of gaokao was of landmark significance and marked the standardization of the education system," said Cheng Fangping, a professor with the School of Education of Renmin University of China, adding that it is also important for China's modernization, reform and opening.

A proper university admission system is profoundly influential for social and economic development, said Liu Haifeng, head of the examination and research center of Xiamen University.

The gaokao system has been continuously adjusted in line with changing realities over the past 40-plus years. Independent enrollment, which enables colleges to enroll students of their choice, and making the process more convenient for disabled students have been part of the adjustment.

While inspecting preparation for this year's gaokao at the National Education Examinations Authority Tuesday, Vice Premier Sun Chunlan said the gaokao's content would continue to be reformed and overall competency would be emphasized. College enrollment will continue to expand to encourage comprehensive and individual development of students.

Statistics from the Ministry of Education showed that China's higher education institutions were home to 36.99 million students in 2016, accounting for one-fifth of the world's total.

"I think the gaokao is so far a fair test as everybody is able to strive to change their fates through the test," Yu said.