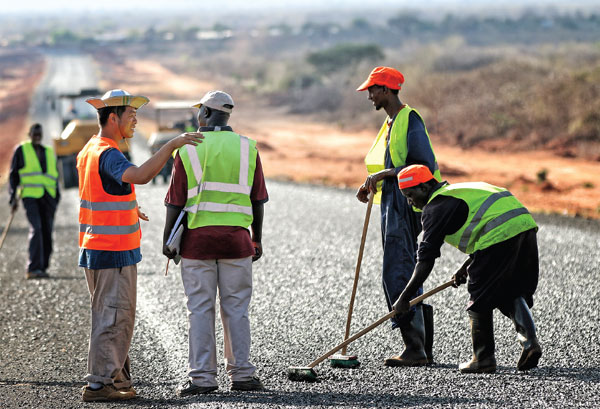 A Chinese engineer consults with local workers at a road construction site in Kenya. (Photo: Xinhua)

FUZHOU, July 25 (Xinhua) -- Yang Dong, a construction project manager for a Chinese company, returned to Africa on a new project in 2017, a few years after completing a water storage project that benefits thousands of residents in northern Kenya.

Yang was posted with the project in Kenya by his firm China Wu Yi, headquartered in Fuzhou, southeast China's Fujian Province. He was responsible for the digging of water storage ponds along the under-construction Turbi-Moyale road that connects Kenya and Ethiopia.

The 130-km road traverses the savanna in north Kenya, which suffers from water shortages in the dry season, causing intermittent tribal clashes over access to water sources.

Apart from providing more economic opportunities for the whole country, especially the underdeveloped north, the road has also changed the lives of thousands of residents.

Yang's project was designed to supply water for construction needs, but they were soon surprised to find that their ponds were frequently visited by residents and their livestock.

Yang recalled that in the beginning, when digging the ponds, he and his colleagues were visited, even threatened by some tribal elders escorted by men with knives and machetes, who were apprehensive of the workers' tools and the noise and dust they created.

As more residents benefited from the project, the Chinese construction workers were welcomed with gifts.

More ponds were dug to meet the needs of residents.

Yang became well-known in the region and was nicknamed "Mr. Think" because he always reminded his workers to think before doing anything, to think about what to do first, and how to work more efficiently.

One day, Yang received six sheep as gifts from a resident. "I was really happy when they gave me the sheep," said Yang. "It means that my project has really benefited them and made their lives better."

Thanks to the ponds, tribal groups no longer instigate conflicts over limited water resources.

More than 200 households have chosen to settle near the ponds, and herdsmen from Ethiopia cross the border to get water from the ponds, according to Wan Dongsheng, deputy general manager of China Wu Yi.

The ponds will be able to provide water for residents for up to 10 years, even considering sediment accumulation, said Wan.

The project began in 2012 and was completed in 2016. It is part of the Trans-Africa Highway, which runs from Cairo, Egypt to Cape Town, South Africa.

The experience of the Turbi-Moyale road project has been introduced in other road projects, including the one that Yang now is working on in Tanzania.

According to Wan, the firm has carried out contracts in over 10 countries and regions in Africa and created around 10,000 jobs for locals since it entered the African market in 2002.

"We will continue to dedicate ourselves to improving local people's living standards while trying to expand our business in Africa," said Wan.