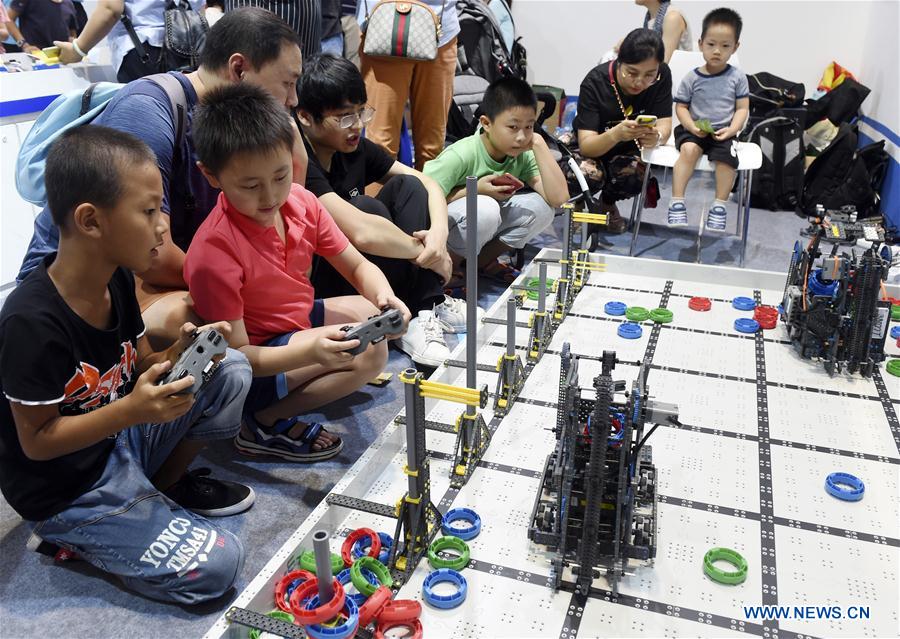 Softly whirring robotic arms five meters tall lifts up a car weighing nearly two tonnes and moves it around in the air, as a crowd of visitors below hold up their phones to record and take pictures.

The power of robots is on full display at the 2018 World Robot Conference held in Beijing from Wednesday to Saturday, where 160 robot makers from China and abroad showcased their products.

Robotic arms in various sizes pick up things as large as cars and as small as pills, hold pens to draw or write, and even make and serve cocktails.

China is the world's largest industrial robot market, accounting for one-third of the world's demand, according to the International Federation of Robotics (IFR). Industrial robot sales in the country have surged in recent years and hit a record high of 141,000 pieces in 2017.

However, foreign robot makers contributed to nearly three-quarters of the sales.

Foreign companies have been developing robots for a long time, helping them build a solid reputation and loyal consumer base, according to Ha.

"Many people continue to buy robots from these companies, not recognizing new players in the market."

Despite this, China's robot makers grew fast in recent years. As of March 2017, more than 800 companies in China were directly involved in robot manufacturing, and by the end of 2017, there were over 6,500 companies related to robotics, according to IFR.

Siasun was founded in 2000 and was listed in Shenzhen in 2009. In 2017, it became a leading Chinese robot firm with a revenue of 2.5 billion yuan (around 362 million U.S. dollars). Industrial robot sales reached 766 million yuan, the largest source of revenue by category.

Manufacturing key robot components such as controllers, servo motors, and speed reducers are traditionally dominated by industry giants such as Zurich-based ABB and Japanese firm Yaskawa.

"In recent years, we have also developed home-made robot controllers," said Ha. "In addition, we are working hard on developing robot software that can provide higher precision and reliability for robots."

Employees involved in research and development in the company has been increasing from 2015 to 2017, and accounted for nearly two thirds in 2017, according to the company's annual report.

The group was founded in 2014, but research on robotics dates back more than a decade at the Harbin Institute of Technology (HIT), a top Chinese technological university.

At its booth, more than a dozen speed reducers made of shiny metal were exhibited. Speed reducers are "joints" of the robotic arms used to reduce the speed of the electric motor safely.

"They look like normal gears, but the difficulty lies in creating them with high precision," Yu said.

He said the speed reducers they made combined the strengths of three major types of reducers and have been patented in China. The company has also filed applications for international patents.

A former university professor, Yu understands how important it is to connect academic innovations with market opportunity.

HGR partnered with several leading robotics laboratories in China to match the market demands with research findings and plans to jointly set up more institutes across the country.

Earlier this year, the company rolled out a robot operating system, which can be used to develop robot software. The demo version of the system is being used by students in HIT.

"China started relatively late in developing the robot industry," said Yu. "But I believe innovation can power our way forward."