China Focus: With confidence in vaccine, key groups in China get COVID-19 shots 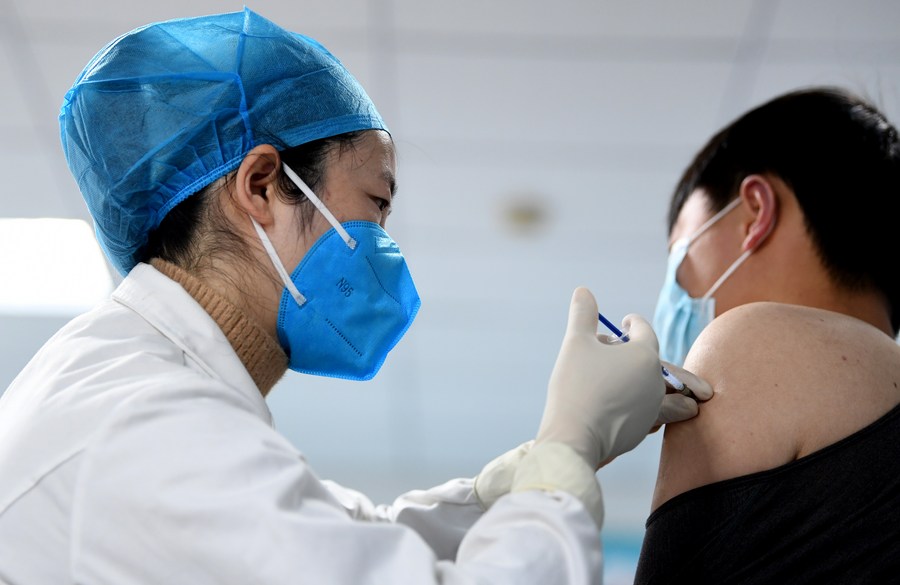 A man receives an injection of the COVID-19 vaccine at a clinic in Feixi County of East China's Anhui Province, Dec. 29, 2020. (Photo: Xinhua)

From medical workers, airport staff, to people handling cold-chain imported products, recipients of the vaccines are getting the shots in an orderly fashion and with confidence in the inoculation.

At the Tianhe International Airport in Wuhan, Central China's Hubei Province where the COVID-19 was first reported, over 2,600 staff members of Hubei Airport Group Company have volunteered to receive the vaccine.

As of Wednesday, about 2,300 of them have been given their first dose. They will receive their second dose in 28 days.

"I am very confident about the effectiveness of the China-developed vaccines, as they were approved after undergoing meticulous laboratory and clinical trials," said Zhang Huping, an officer of the company in charge of medical affairs.

Vaccinees were ferried from the airport to designated clinics in groups and had their personal information documented before being given the shots, said Zhang, adding that medical workers were also on standby to deal with any emergencies during vaccination.

In the event of vaccinees showing adverse effects, all related information such as the time and place of the vaccination, the vaccine giver, the serial number of the vaccine, as well as the health status of the vaccinee can be traced, according to Zhang.

"After the vaccines were approved, the frontline workers at the airport were among the first groups of people being inoculated, which made us feel safe," said Zhang.

"Before the shot, I was a little bit nervous about the possible side effects," said Yu. "Now a week has passed, I feel no discomfort at all. "

"I feel like I have been insured against the infection risks. I really appreciate that the government and my company have given us priority for the vaccination," said Yu.

Beijing is also making an all-out effort to vaccinate its key groups of people with high infection risks.

Wu Jianguo, a production supervisor with Beijing-based biotech company Funkey Shiji, received the vaccine on Tuesday along with his 76 colleagues.

The business of Wu's company involves pastry production and processing, which makes its employees a target group for COVID-19 vaccination.

Receiving the jab not only safeguards employees' health but also reassures consumers, he said.

At a vaccination venue in the city's Chaoyang District, Wu was given the shot after being informed about safety precautions on vaccination and signing a consent letter. The whole process took less than a minute.

"It evoked my memory of inoculation when I was a kid," said Wu. "It stung a little bit. Otherwise, I didn't feel a thing."

Also vaccinated at the same venue on Tuesday were Ren Jincheng, a 38-year-old Mcdonald's deliveryman and his wife, a sales clerk in a local supermarket.

As a deliveryman who makes regular contact with people every day, Ren had been worried about the danger of contracting coronavirus.

After he got the news that free vaccination would be provided to all Chinese citizens, he immediately wrote on social media: "I've been looking forward to this day!"

"I have every confidence in our country and the effectiveness of the vaccine. I am willing to receive the jab even at my own expense!" he said.

Beijing is slated to complete the inoculation for key groups before the Spring Festival, which falls on Feb. 12 this year.

Over much of the past year, Zeng Jingyi, a nurse at a health center in the southern Chinese city of Guangzhou, had been assigned to work at an isolation center where people with high risks of COVID-19 infection were put under medical observation.

During March and April, Zeng's main duty was to disinfect the shuttle buses that ferried overseas returnees from the airport to the isolation hotels.

"Every day I disinfected eight to 12 buses," Zeng said. "There had been passengers on the buses who later tested positive for COVID-19."

"I have been looking forward to the vaccine for quite some time. With it, frontline workers like us will be better protected," she said.

Zeng was thrilled when she learned on Dec. 20 that vaccines had been made available to all employees of the center. Two days later, she got the shot.

"I feel reassured after getting the shot," said Zeng. "It was like I was putting on an extra layer of protection against the virus."

Except for three who were considered unfit due to previous allergies, all of Zeng's 42 co-workers have received the vaccine. None of them reported serious discomfort.

"We all know that it is not time to let our guard down. We will keep wearing masks," she said.