CHINA China forced to respond to US oppression of Chinese media: spokesperson

China forced to respond to US oppression of Chinese media: spokesperson

"China is forced to take countermeasures, since our long-time tolerance to various oppression measures by the US of the Chinese media has only led to intensified discriminatory practices in return," Chinese Foreign Ministry spokesperson Geng Shuang said at a regular press conference on Thursday. 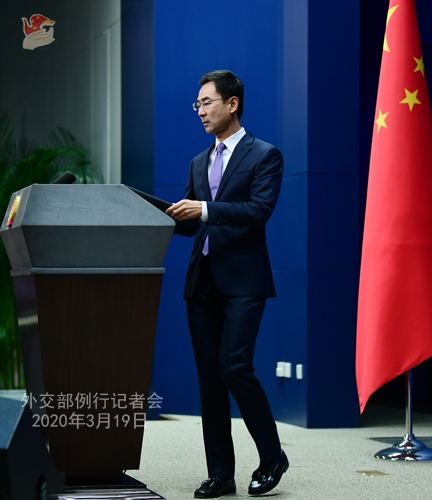 One of the countermeasures China announced is that it will take reciprocal measures on American media based on the discriminatory restrictions the US has adopted on Chinese journalists with regards to visas, administrative inspections, and interviews.

In December 2018, the US required relevant Chinese media entities in the US to register as "foreign agents". Last month, the US designated five Chinese media as "foreign missions", and then imposed a personnel cap on them, expelling a great number of Chinese journalists.

"The facts have fully proven that the so-called freedom of the press advertised by the United States is very hypocritical and deceptive," said Geng. "The Chinese Journalists Association has expressed strong opposition to the unfair treatment and oppression on behalf of the Chinese media. We support Chinese media to firmly safeguard their own reputation and interests, and China will be forced to take relevant measures against American journalists based on the principle of reciprocity."