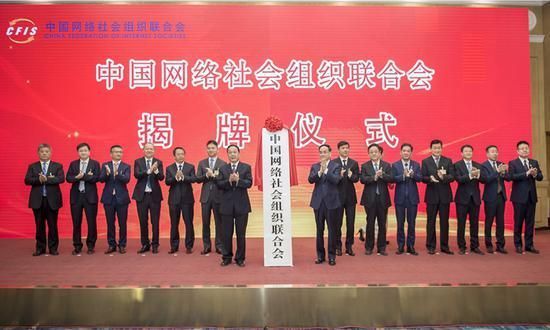 The CFIS will provide political guidance for member organizations, encourage them to improve operations, help them express their needs and protect their interests, oversee operations of member organizations, and promote the  development of Party organizations in the industry, said Ren Xianliang, CFIS president, at the inauguration ceremony. The CFIS is supervised by the Cyberspace Administration of China.

Zhao Zhanling, a legal counsel of the Beijing-based Internet Society of China, told the Global Times that the government is urging internet companies to voluntarily and actively participate in cyberspace administration through the establishment of the CFIS.

"Just relying on government authorities is far from enough in administering cyberspace, and it's more important that CFIS members voluntarily clean the cyberspace environment," Zhao said.

Many internet companies this month stepped up management to their content after internet authorities punished video websites Toutiao and Kuaishou.

Companies like Sina Weibo, Tencent and Youku have established special teams to take down audio and video programs suspected of distorting history and involving pornography and violence. They have removed over 1.5 million improper audios and videos, shut down 40,000 accounts and intercepted over 13.5 million messages, the State Administration of Radio and Television announced on Thursday.

"The CFIS, highlighting its role to promote Party spirit in the industry, is significant for internet companies to maintain internet security to avoid political risks, such as to prevent foreign spy agencies or extreme forces from manipulating Chinese netizens," Zhao said.

Qin An, head of the Beijing-based Institute of China Cyberspace Strategy, said that the Party should step up its guidance of CFIS members so that internet companies could raise their awareness in safeguarding China's sovereignty and interests.

"But the Party units will not interfere in the operations of these companies," Zhao said.