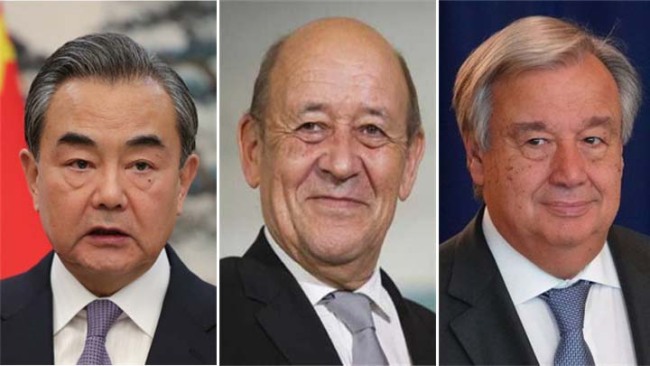 China, France and the United Nations reiterated their firm commitments to working together in combating climate change in a press statement released here on Friday following a three-party meeting on the sidelines of the Group of 20 (G20) summit.

In the statement, the three parties called on the international community to join hands in building a low-carbon society and pursuing sustainable development, as they defined climate change as critical to the future of the humanity.

In particular, the Chinese side reiterated its firm support for implementing the Paris Agreement based on the principle of common but differentiated responsibilities and respective capabilities, and for reaching a package agreement at the upcoming Conference of the Parties (COP24) of the United Nations Framework Convention on Climate Change (UNFCCC).

The COP24, slated for Dec. 2-14 in Katowice of Poland, is to adopt implementation guidelines of the Paris Agreement, which was signed at the COP21 to keep a global temperature rise this century well below 2 degrees Celsius above pre-industrial levels and to pursue efforts to limit the temperature increase even further to 1.5 degrees Celsius.

In the statement, China and France renewed their highest political commitment to the effective and transparent implementation of the Paris Agreement in all aspects. The two sides said they hoped that the G20 summit would give a political impetus to the success of the COP24.

At the press conference, Wang stressed that multilateral process should be the best and only option for combating climate change. He urged all nations to keep their political promises, take their responsibilities and firmly adhere to cooperation.

China takes the implementation of the Paris Agreement as an inherent part of its own sustainable development, and has taken decisive actions in this regard, which has resulted in concrete achievements, Wang said, adding that it will continue devoting itself to better global climate governance, deeper South-South cooperation in fight against climate change and a greener Belt and Road, Wang said.

Drian, for his part, said that, at this critical moment in facing up to climate challenges, the international community must beef up actions and demonstrate resolves. He also promised to support China in hosting the COP15 of the Convention on Biological Diversity in 2020.

Guterres, apart from expressing gratitude to the two nations for their leadership in reaching and implementing the Paris Agreement, told the press that, the pace of climate change and the challenges it has brought to all nations have exceeded expectations.

The international community must work together in pushing for success of the COP24 and the United Nations 2019 Climate Summit, said the UN secretary-general.