China's top respiratory expert Zhong Nanshan said the country has fully vaccinated 1.08 billion people as of Wednesday, accounting for 76.8 percent of the total population and laying a solid foundation for achieving herd immunity by the end of this year. 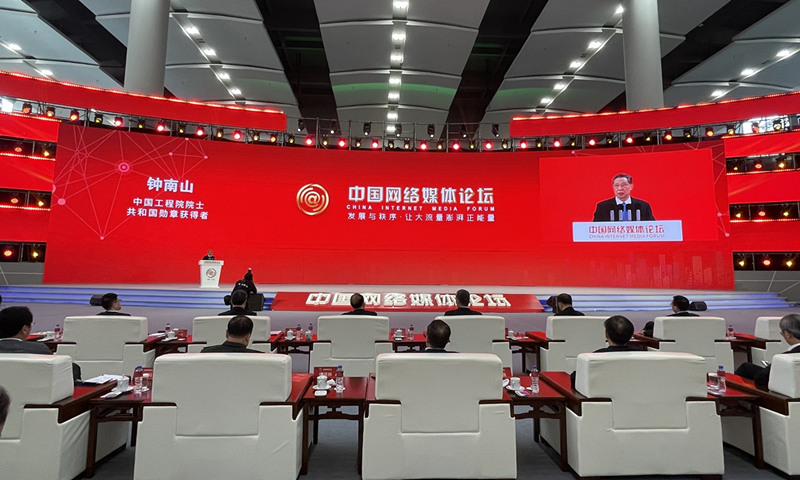 Zhong said this at the opening ceremony of China Internet Media Forum in Guangzhou, South China's Guangdong Province on Thursday. It is the highest, most authoritative and influential annual event in China's media industry.

He stressed that the West advocates personal freedom but it eventually leads to poor handling of the pandemic. "What we need is collective freedom, social freedom and national freedom. Only with these freedoms can we have individual freedom, and only then can China become a country with low death rate and number of COVID-19 patients," Zhong said.

Zhong delivered the speech from the perspective of a frontline doctor and noted that the significant role media outlets have played in helping the fight against the pandemic in the past two years.

"As of Wednesday, the number of people who have completed the vaccination has reached 1.08 billion, accounting for 76.8 percent of China's population. This has laid a very good foundation for reaching the 80 percent needed for achieving herd immunity by the end of this year," said Zhong.

Zhong pointed out that some Western countries attach great importance to human rights and advocate the right to respect individual freedom. They have the freedom not to wear masks, the freedom to assemble and the freedom not to get vaccinated. But the result is the spread of the epidemic, with repeated outbreaks of large numbers of infections and deaths.

"But in the fight against global public health events, China pays attention to the highest human rights: the right to life, more importantly, the right to health. People wear masks, consciously limit their activities and cooperate with nucleic acid testing to reduce the spread of the virus. China has the lowest number of COVID-19 patients in the world - 8.9 per 100,000 people, which is only 1/1,678 of the US, and the lowest mortality rate 0.4 per 100,000 people, which is 1/606 of the US," Zhong said.

Zhong pointed out that wrong and false information spread as fast as the virus, or even faster, resulting in "information epidemic" and creating social disorder.

For example, some Western countries used their advantage of their grip on the media to spread the idea that coronavirus was produced, manufactured or leaked from China's laboratories. Because of these erroneous remarks, their people did not know the facts, which had led to the increasing discrimination against overseas Chinese.

Zhong also said that some local governments were adding further restrictions or adopting one-size-fits-all approaches in implementing the epidemic prevention policy, and the Chinese media should bear due responsibility to rectify wrong deeds.