CHINA China goes all out to battle Yangtze River floods

China goes all out to battle Yangtze River floods 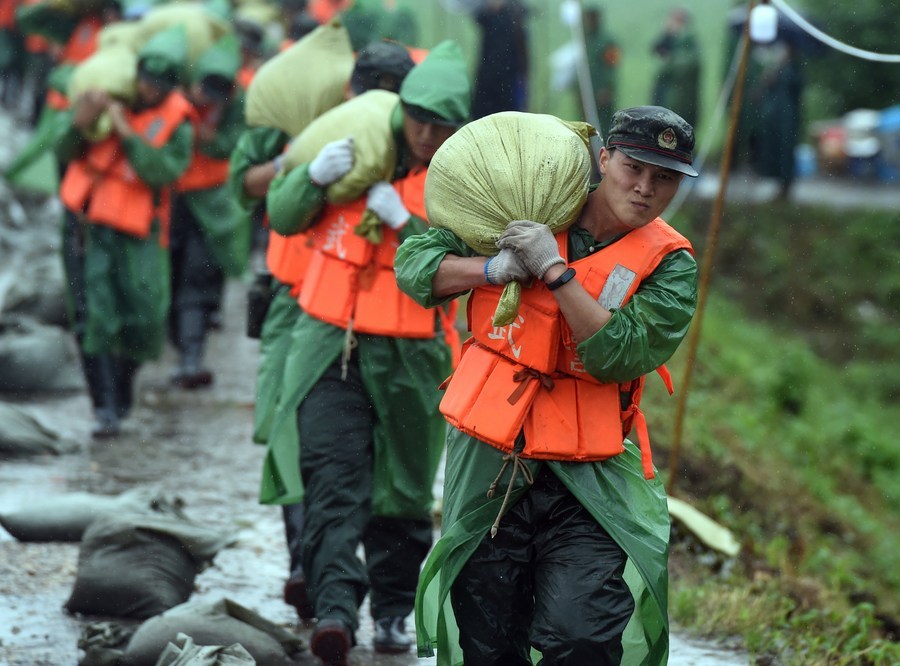 Members of the armed police carry sandbags to reinforce a section of the levee in Baimao Town of Wuhu, east China's Anhui Province, July 16, 2020. (Photo: Xinhua)

Since the rainy season started in June, 54-year-old Tang Jianjun has been patrolling a nearby embankment around the clock to uncover hidden dangers in the city of Yangzhong, east China's Jiangsu Province.

Although the water level in the Yangtze River, the country's largest, remains high above the alert level, Tang is feeling less worried about the flooding this year than that in 1998.

Yangzhong, the second-largest island on the Yangtze River, is protected by 120 km of embankment. Local residents consider the embankment their lifeline.

The width and height of the embankment have been raised to 10.05 meters and six meters from less than nine meters and three meters respectively since the disastrous flooding in 1998, recalled Tang, Party chief of Taiping village.

As China's capability of flood control and disaster relief improves, the loss of property and life has dramatically decreased.

Statistics show that the number of people dead or missing due to the floods since July was 82 percent lower than the average for the same period of the past five years, while collapsed houses and direct economic losses dropped 78.3 percent and 5.9 percent respectively, according to the Ministry of Emergency Management.

In Walong village in the hard-hit province of Anhui that borders the Yangtze River, villagers have been patrolling a 500-meter-long embankment in three shifts a day since early July, using long bamboo sticks or shovels to remove weeds at the bottom of the levee and carefully monitor if there is any water seepage on the ground.

"We will immediately inform the authorities once we find any problems. It is very important because a leakage could result in the crash of the whole embankment," said Hu Mingzhe, a village official.

A total of 35 rivers and lakes in Anhui, including the Yangtze River and Huaihe River, have seen water exceed warning levels. The provincial government has activated the highest-level emergency response for flood control due to the grim situation.

Since July 2, continuous heavy rains have affected more than 3.64 million residents and forced the evacuation of 606,000 people in the province.

In Jiangsu, the local flood control authorities have also given priority to embankment patrol, beefing up flood inspection forces in regions plagued by flooding.

Statistics from China's emergency management authorities show that over 2,500 flood-related risks have occurred in the five provinces in the middle and lower reaches of the Yangtze River, and all of them have been effectively handled.

To enhance flood prevention, the city of Wuxi in Jiangsu hemmed in by the Taihu Lake, China's third-largest freshwater lake, has turned to smart flood monitoring systems.

"We have adopted some new technologies for the first time this year," said Zhang Xiaowen, an official with Wuxi's flood control and drought relief headquarters. "The decision-making support system at the headquarters integrates data from more than 200 local hydrological stations."

According to Zhang, the flood and rainfall data is updated every five minutes. "We can also check the data and interact with meteorological departments through a smartphone application, which greatly improves our decision-making efficiency in response to flooding."

It is a regular task for patrol teams to check if there are potential risks along the embankment during the flood season. In this year's flood fighting, a series of advanced equipment have greatly relieved the stress of patrollers.

"The unmanned aerial vehicle plays an important role in inspecting the embankment," said Yang Quanfu, head of the hydrological station in Xinba Township of Yangzhong. Photoing and video shooting by a drone help him finish the embankment inspection in 10 minutes.

There are 175 culverts along the embankment in Yangzhong, some of which are too small for the staff to walk through. "The microrobots could replace us to enter the culverts to examine whether there are any leakages or blockings," said Guo Feng, deputy director of the local water resources bureau.

These new attempts in Yangzhong are the epitome of new flood relief efforts in China. More use of high-tech devices like electronic guards, real-time virtual reality observation and mobile flood-fighting walls in the flood-hit regions across China has raised the efficiency and accuracy of the relief work.

On an electronic screen in the command center of the provincial water resources department in Anhui, dams, rivers and reservoirs appear in different colors, representing different water levels.

This electronic map integrates real-time data such as precipitation and water levels from over 8,000 automatic information-collecting stations in Anhui Province, said Hu Weiquan, an official with the provincial water resources department.

Wearing a pair of VR glasses, Liu Yuanyuan of the flood control and emergency command center of Anqing City in Anhui Province can inspect real-time situations of dam gates in 360 degrees. "In the past, we had to send staff to inspect every half an hour, but nowadays we can check it online anytime," said Liu.

The reinforcements for embankments are also of vital significance for flood relief.

The local government in Nanjing, the capital of Jiangsu Province, finished a reinforcement project for a 22.5-km-long dike in Jiangxinzhou island in the middle of the Yangtze River before this year's flood season. Now the reinforced river levee, 12 meters high and 8 meters wide, forges a staunch defense against the roaring flood.

Nanjing has invested more than 8 billion yuan (about 1.14 billion U.S. dollars) since 2016 to dredge main waterways and reinforce 200-km-long embankments for the main streams of rivers.