China gradually shifts from factory for Japan to its main market, economic competitor 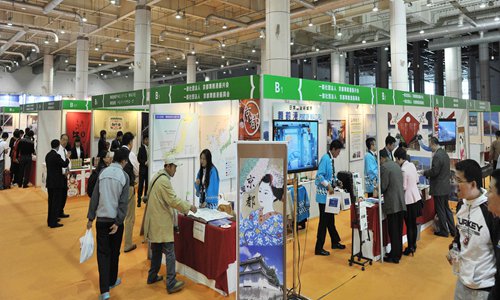 Visitors ask for information from Japanese enterprises at an exhibition for Japanese products in Dalian, Northeast China's Liaoning Province in October 2013. (Photo: VCG)

For most people born in the 1980s in China, Japanese goods were a part of their life. As young children, they may remember a green Sharp refrigerator placed in the living room next to a 29-inch Sony color TV set on which they watched cartoons during every summer holiday. As young teens, they may have hid a Pansonic pocket stereo under the pillow from their parents after bedtime. As university students, they admired fashionable but cheap T-shirts in Uniqlo, and used Shiseido's low-end beauty products.The sequence of these Japanese goods' appearance in China reflects Japanese enterprises' development in China over the past 40 years. During that time, China has grown from a cooperation partner into a competitor for Japanese enterprises.

Panda diplomatsKakuei Tanaka, the former Japanese prime minister, visited China on September 25, 1972, and China and Japan inked a joint communiqué, ending their long state of war and attaining normalization of diplomatic ties.A month after the prime minister's visit, Japan Airlines (JAL) flew China's "panda diplomats" Kangkang and Lanlan to Japan. The two endangered animals enjoyed profound love from the Japanese people after they settled at Ueno Zoo in Tokyo.Two years later, JAL established four branches in Beijing and Shanghai, and launched regular flights between the two countries in the same year. The nations saw more intensive economic exchanges after China and Japan signed a treaty of peace and friendship in 1978. China's first batch of air stewardess accepted their cabin service training at JAL's assembly building in Haneda, and a Boeing 747SP jet airplane that China bought was entrusted to JAL for maintenance in 1981.From the 1980s to the mid-1990s, China was thirsty for Japan's experience on its economic governance as the Chinese government endeavored to transform its economy from a planned system to one incorporating market-oriented mechanisms. Japan took a fancy to China's potential market, hoping to grab a bigger portion amid competition with firms from other countries and regions. Therefore, massive investments and advanced technologies poured into China from Japan.Canon's entry into China took place against this backdrop, when Deng Yingchao, the late chairwoman of the National Committee of the Chinese People's Political Consultative Conference, expressed the hope that Canon could "assist China to develop its precision industry" during her visit to the company's headquarters in Japan in 1979. Kaku Ryuzaburo, Canon's president, agreed pleasantly.After 37 years, 68-year-old Hideki Ozawa, who is the incumbent executive vice president of Canon, still feels thrilled about his first trip to China."China was not a rich country at that time, but I was sure that China would see huge development in the near future," Ozawa told Global Times. He has been working in China for 18 years, including his stay in Hong Kong.Doing business in China was not easy at first. Mr Tanaka, a retired technician from Daihatsu Motor, recalls a business errand to Tianjin in 1984. Because there were no direct flights from Osaka to Tianjin, he had to take off in the early morning from Osaka, then fly to Beijing and take a bus at night from Beijing to Tianjin.Akira Yonezawa, JAL's senior vice president in China, told the Global Times that their flights had to stop at multiple cities to beckon as many passengers as possible to help sell enough tickets to cover the high operating costs. The flight was like a bus in the air.Mr Tanaka recalled a terrifying bus trip from Beijing to Tianjin that topped off his voyage. "Fear topped all my feelings," said Tanaka. "There was no lighting along the road from Beijing to Tianjin, and the driver never turned on the car light to save electricity. It was dark both inside and outside and I had no idea about how I arrived in Tianjin. It was just like taking an adventure to China by a bus in the air," quipped Tanaka.

A major playerWith an eye to China's cheap and abundant labor force, in the middle and late 1990s, Japanese firms started to expand their investments. China was deemed a perfect manufacturing base by Japanese companies. Bilateral ties between China and Japan underwent a subtle change in the beginning of the 21st century as China entered the World Trade Organization (WTO). China was growing into an economic peer of Japan rather than an aid recipient. In the same period, China-Japan relations dropped to the freezing point due to a dispute over former Japanese prime minister Junichiro Koizumi's multiple visits to the Yasukuni Shrine. However, this political freeze didn't affect Japanese firms' enthusiasm for marching to China, and the Chinese government, in return, received them favorably. Eric Harwit, professor of Asian Studies at the University of Hawaii, said that China's impressive achievements over the 40 years of reform and opening-up needed the cooperation of foreign enterprises, and Japanese enterprises were a major player. Speaking fluent Chinese and competent Japanese, Harwit is also a senior research fellow at his department's East-West Center who has been observing the economic engagement between China and Japan in his travels between the two countries for research and study since the early 1980s.Japanese enterprises' investment in China topped their investment in other countries from the late 1990s to the mid 2000s as the Chinese economy boomed, said Harwit.

Embrace the massive marketIn 2005, overseas enterprises led by Japanese companies had to cut their direct investment to China because China axed its preferential export tax and raised wages to shift to a domestic-consumption-driven economic model.In addition, the production cost for processing and trade enterprises in China rose sharply due to the appreciation of the Chinese currency.Unlike other overseas companies, Japanese firms discerned China's new potential as a huge market rather than a manufacturing base. China had successfully transformed to a market from a factory. In the same period, China also adjusted its policies to allow foreign companies without Chinese partners to do business in China.To cater the new giant market, Japanese companies also made some innovations and changes. Canon, a brand name that had been used globally since 1935, was translated in 2006 into Jianeng, a homophone for Canon in Chinese.This was a groundbreaking gesture for the transnational company, and the move generated lots of publicity.The trend soon seeped into the services sector. JAL has made changes to better serve Chinese customers, such as adding Chinese signs and bilingual broadcasts of both Japanese and Chinese, and hiring more Chinese staff.Shanghai ranked second to Los Angeles as the biggest residential city for Japanese people outside Japan, with over 70,000 Japanese residents in 2008. Yonezawa recalled that most of JAL's customers were Japanese people in 2008 when he was appointed senior vice president of the Shanghai branch. As Japan became a popular tourism destination for Chinese tourists, Chinese passengers occupied most of the seats in its flight. "Before, Japanese passengers occupied 55 percent of our total business and Chinese passengers made up 45 percent. However these numbers reversed in 2016," Yonezawa said.In Yonezawa's view, the most significant change that reform and opening-up brought China is "richness," both in fortune and spirit. Today, people in China are willing and able to go abroad for visit, which undoubtedly will provide more opportunities for the entire aviation industry, and JAL will dig deep to find the Japanese-style services that win Chinese customers' favor.

Compete or work for a win-win result?In 2010, China surpassed Japan as the world's second largest economy, following the US, with a GDP worth $5.9 trillion. In 2017, 7.35 million Chinese tourists visited Japan, making a great contribution to the Japanese GDP.The "poor country" that Japan once "aided" is now "aiding" back. It seems hard for Japan to accept such a dramatic role reversal. The shifted economic positions and data also make friction between China and Japan more pronounced. Examples include competitions between the two countries for high-speed train projects in Southeast Asian countries. With regards to the question of how the two countries will align their relations in the future - competition or win-win cooperation - people made different conjectures.Yonezawa said there exists competition between JAL and Chinese airlines, but both sides see more win-win situations. "Our Chinese peers share with us what Chinese customers like, and we, in return, teach them Japanese-style services. Only with both sides working together to provide high-quality services can we expand the market scale," he said.Harwit noted that China had cooperation with many overseas companies in the course of reform and opening-up. However, those companies actually barely shared their technology with China. This includes Japanese companies. He said that the great achievement China made in developing its own technology is, to a large extent, by its own efforts. The growth and expansion of a batch of domestic firms such as Alibaba, Tencent and Huawei have helped drive China's overall competition.Harwit said Japan is more interested in China's cheap labor force and vast market than in making China a cooperation partner. However, he says the two countries still enjoy a strong complementarity. "China controls its own destiny all the time, with other countries playing an auxiliary role," Professor Harwit said. "Looking at the last 40 years in retrospect… Japanese enterprises' supporting role remains unchanged."