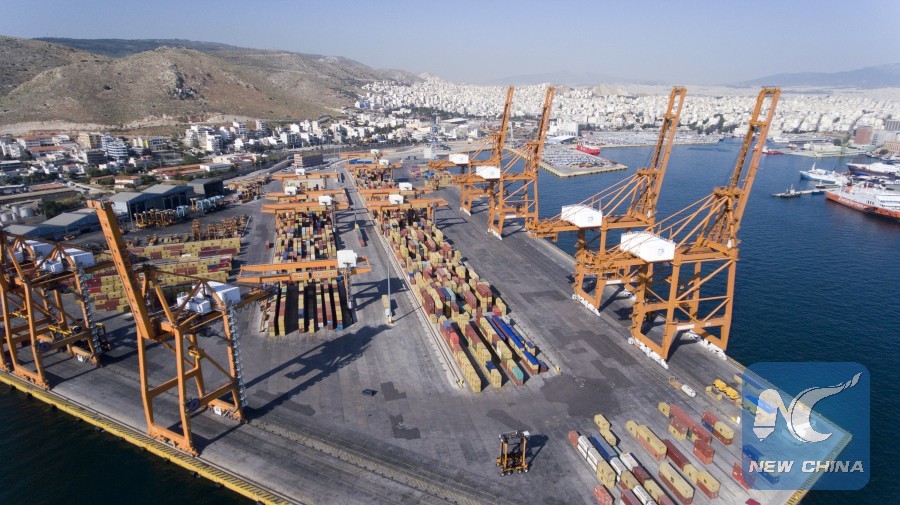 The Pireaus Port's container terminal in Greece, May 3, 2017. (Press: Xinhua)

ATHENS (Xinhua) -- China-Greece collaboration under the Belt and Road Initiative (BRI) proposed by Chinese President Xi Jinping six years ago is a model for mutually beneficial cooperation between China and the European Union (EU) countries, officials, scholars and businessmen have said.

The attendees at a conference on bilateral relations and the BRI organized at Aikaterini Laskaridis Foundation in Piraeus Port at the weekend praised China-Greece cooperation so far in infrastructure, shipping, finance, trade, tourism, energy, education, culture and other fields.

"The BRI is a major historic opportunity for common development. China-Greece teaming in the BRI context is a model for EU countries conducting mutually beneficial cooperation," said Xie Fuzhan, president of the Chinese Academy of Social Sciences.

Greece is among the first EU countries to sign an intergovernmental cooperation document with China to jointly advance BRI cooperation.

In April this year, Greece joined the cooperation mechanism of China and Central and Eastern European Countries as a full member, creating new opportunities for the development of the mechanism as well as for China-EU relations and China-EU connectivity.

The successful regional cooperation has been giving impetus to the prospects of the BRI in Europe, participants at the conference said.

Through Chinese investment, Greece's Piraeus Port, a flagship project in bilateral BRI collaboration, has been transformed into one of the leading container ports in the Mediterranean. It becomes a key transport corridor linking the port to central Europe.

"Piraeus Port is one of the first major projects ... BRI is a work in progress. More must be done, but the results are measurable and are quite positive," Thanos Dokos, deputy national security advisor, told the conference, underlining Greece's willingness to further strengthen cooperation with China.

Greece can be a complementary bridge between the EU and China, the Greek official said, stressing the need to build confidence and reassure that the final outcome will be a win-win situation for all.

There is so much that can be achieved in the future, starting from shipping and tourism to culture, Dokos talked about the prospects of China-Greece cooperation under the BRI.

"Today with the deepening of globalization, the BRI, rooted in the spirit of the ancient Silk Road, is giving impetus for cooperation between the two countries of different scales, different systems and different cultures," said Stella Kostopoulou, associate professor at School of Economics at the Aristotle University of Thessaloniki.

The potential to see more Chinese tourists to Greece in coming years and more understanding and cooperation via people-to-people exchanges, is most promising, said Kostopoulou, who is also president of the European Interdisciplinary Silk Road Tourism Center.

"For China, Greece, a member of the EU, has a strategic position as a gateway to Europe and the broader region and a transport hub on the Maritime Silk Road. Therefore, Greece can now acclaim also the role of the Chinese tourist hub, the tourist gateway to the rest of Europe," Kostopoulou added.

In an article published on Greek newspaper Kathimerini (The Daily), former Greek Prime Minister George Papandreou, also referred to bilateral cooperation under the BRI and the new horizons of opening up.

The major challenges of the era of globalization demand international cooperation, he noted.

"Collaboration in the BRI context has great prospects," the former prime minister said, saying that "China COSCO Shipping's investment in Piraeus Port has been recorded as one of the most successful examples of this initiative."