CHINA China-Greece relationship could be example for rest of Europe: experts

China-Greece relationship could be example for rest of Europe: experts 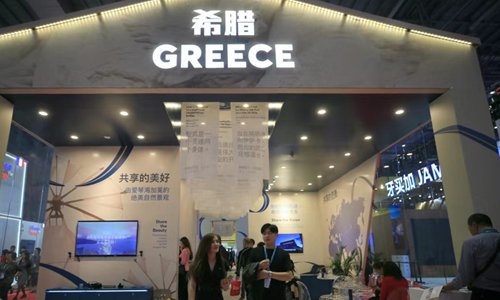 Chinese President Xi Jinping is scheduled to pay a state visit to Greece and will also visit Brazil for the annual BRICS summit, with Chinese experts saying that the fast-developing relationship between Beijing and Athens could be an example to the rest of Europe that shows the actual benefits of friendly ties with China and joining the China-proposed Belt and Road Initiative (BRI).

Since the APEC 2019 in Chile has been canceled, another major international event BRICS summit could attract more attention, analysts noted on Thursday.

While protectionism and unilateralism among developed Western countries has added uncertainty to the world economy, cooperation among emerging-market economies will be a crucial stabilizer, they said. Xi will visit Greece at the invitation of Greek President Prokopis Pavlopoulos and then at the invitation of Brazilian President Jair Messias Bolsonaro, he will attend the 11th BRICS (Brazil, Russia, India, China and South Africa) summit in Brasilia, capital of Brazil, from November 10 to 15, Ministry of Foreign Affairs spokesperson Hua Chunying said in Beijing on Thursday.

The China-Europe relationship is comprehensively developing with both traditional European powers like France or EU members with smaller economies like Greece which harbor an ambition to reform and develop.

Greece is a guest of honor at the ongoing 2019 China International Import Expo (CIIE) in Shanghai where Greek exporters are seeking more opportunities to try and build more connections with Chinese partners.

According to the Greek Embassy to China, dozens of Greek companies involved in energy, tourism, shipping, construction, pharmacy and agriculture products are participating in the expo.

At the exhibition area for Greek firms, visitors can taste olive oil, honey, goat cheese and wine, and they can also do a sightseeing tour of the city of Santorini via virtual reality.

Athanasios Gogas, CEO of Greek caviar maker Mediterranean Escargots, told the Global Times that "In Greece we have the feeling that China is far away but also very close to Greece. There's something very familiar between China and Greece.

At the Greek exhibition area, a banner reading "The South Gate of Europe, Piraeus, Greece" is displayed.

According to the Xinhua News Agency, the Greek government and Piraeus Port Authority S.A hailed on October 10 the approval by the Committee of Planning and Development of Ports investments amounting to 611.8 million euros ($672.9 million) at Greece's largest port.

"An emblematic investment for Greece starts immediately. A new era dawns for the Piraeus Port," read an emailed press release issued by the Greek Shipping Ministry.

Nektarios Demenopoulos, deputy manager of the public relations, investor relations & company announcements department of the port authority, told the Global Times on Thursday that "Piraeus is the largest parcel port in Europe and the fourth largest container port in Europe. The geopolitical position of Piraeus is very convenient for shipping companies."

Cooperation with COSCO Shipping, the largest shipping company in the world, "enabled the port of Piraeus to expand and become one of the container ports in Europe. So we have very good cooperation experience with China," he said.

"We hope that the visits of our prime minister and President Xi will speed up the great relations between both countries. Also we hope to speed up our investment plans in port of Piraeus, make the port ever bigger."

Port cities like Rotterdam and Hamburg are worried about their Greek competitor, Jorgos Tzogopoulos, a Greek political studies expert, told the Deutsche Welle on Saturday.

Their concern was "totally unnecessary," Li Haidong, a professor at the China Foreign Affairs University's Institute of International Relations in Beijing, told the Global Times.

"Greece has already signed the BRI cooperation MOU [memorandum of understanding] with China in 2018 and actively cooperates with China based on the rule set by the EU," Li said.

"If Greece can benefit from it, the rest of Europe or other EU members can also copy this kind of success by embracing the BRI and cooperating with China."

Xi is scheduled to visit Brazil for the BRICS summit after Greece.

Brazilian President Bolsonaro visited China in October and frequent meetings between the leaders will bring significant opportunities for China and Brazil, the major economies of Asia and South America, to boost their ties, said Chinese experts.

"Currently due to protectionism and unilateralism among some Western developed economies, the recovery of the world economy is still facing serious challenges and uncertainty, so cooperation between emerging market economies like BRICS countries is crucial, since they are the stabilizer of the world economy at this moment," said Li.

The five leaders of BRICS countries are believed to be ready to deliver a message of confidence to the world at the summit in Brazil despite the APEC Chile 2019 being cancelled, Chinese experts noted. The APEC summit had been scheduled to be held on the same continent and in the same month.