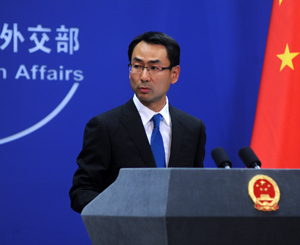 China welcomes the momentum on the Korean Peninsula and hopes relevant parties not to provoke each other, the foreign ministry said Thursday.

"South Korea and North Korea have made a series of interactions and friendly cooperation centered on the Winter Olympics, which as a close neighbor, China welcomes and supports," ministry spokesman Geng Shuang told a daily briefing on Thursday."We have stressed that dialogue is the only way to resolve the deadlock on the Korean Peninsula and break the vicious circle. The two Koreas have taken the precious first step and we hope all relevant parties could work together to keep the momentum and promote the interactions, especially possible dialogue between North Korea and the US, in an effort to open dialogue channels for resolving the Korean Peninsula issue," Geng said. Geng said that China hoped all parties would not make moves that provoke each other or intensify conflict. They should work together to maintain the stability of the Korean Peninsula and create a good atmosphere for possible dialogue. "We hope the US and North Korea can seize the opportunity to show their sincerity and work together. The international community should also promote and cheer them for doing so," Geng said. Geng's remarks came after news on North Korea's plan to send a high-ranking delegation to the closing ceremony of Winter Olympic Games.The high-ranking North Korean delegation, led by Kim Yong-chol, vice chairman of the Central Committee of the ruling Workers' Party of Korea, will make a three-day visit to South Korea beginning Sunday when the closing ceremony is scheduled to be held in South Korea's eastern county of Pyeongchang, the Xinhua News Agency reported.Ri Son-gwon, chairman of the Committee for the Peaceful Reunification of the Fatherland, will accompany Kim as a delegate together with six support staff, according to the notification delivered by North Korea earlier in the day. Unification Minister Cho Myoung-gyon said that it is too early to predict such a possible contact, "but the government will make efforts to lead the US and North Korea to open dialogue," Cho said, Yonhap News Agency reported.An official at South Korea's presidential office said earlier in the day that there is a low chance of direct contact between the North Koreans and the US delegation, Yonhap reported.The minister also said that the government needs to take into account many factors, including the impact on inter-Korean ties and possible talks between the US and the North.Ivanka Trump, the first daughter and senior adviser to US President Donald Trump, will lead the US delegation to the closing ceremonies on Sunday,  ABC News reported on Thursday.The White House did not say if Ivanka Trump planned to meet with the North's delegation as a part of her visit.