"Leaders of the Democratic People's Republic of Korea (DPRK) and the Republic of Korea (ROK) met again in Pyongyang and signed the Pyongyang Joint Declaration of September to reach a new important consensus on improving the development of mutual relations, easing military tensions in the region, promoting the denuclearization of the Korean Peninsula and the peace talks. We welcome this and express our commendation for the positive efforts made by both sides," said Geng Shuang, the spokesperson of China's Ministry of Foreign Affairs (MFA). 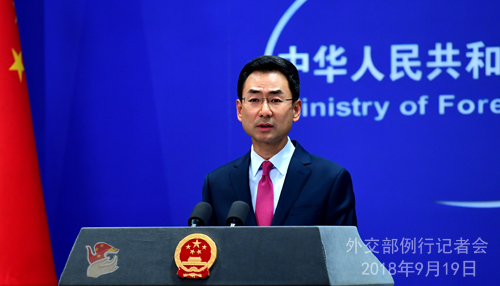 "Peace and prosperity, reconciliation and cooperation are the common aspirations of the people of the peninsula and the region. As a close neighbor of the Peninsula, China has consistently supported the north and south sides of the peninsula to improve mutual relations and promote reconciliation and cooperation through dialogue and consultation," said Geng.

"We hope that the DPRK and the ROK will continue to implement the consensus of the declaration and continuously strive to promote north-south interaction and cooperation and play a positive role in politically solving the Korean Peninsula issue and achieving lasting regional peace," Geng said at the regular press conference on Wednesday.