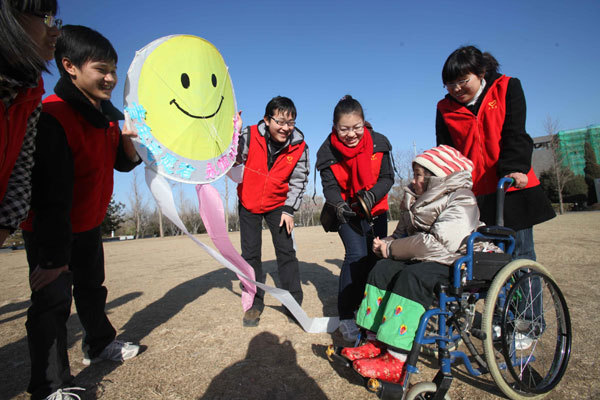 BEIJING -- The total number of registered charity organizations in China stood at 7,169 at the end of June, with 172 million volunteers nationwide, according to a new report.

The report on the enforcement of the Charity Law was submitted on Thursday to the ongoing session of the National People's Congress Standing Committee.

Information on over 3.9 million volunteer projects has been made public, and the volunteers have rendered more than 2.19 billion hours of service in total, said the report.

According to the results of a survey presented in the report, about 87 percent of respondents have donated money or goods to charitable causes.

In their battle against the COVID-19 epidemic, by the end of June, charity organizations at all levels nationwide had received nearly 39.63 billion yuan (about $5.88 billion) in donations and 1.09 billion items of urgently needed supplies, according to the report.

It showed that, since 2016, the year the Charity Law was passed, civil affairs authorities at all levels have carried out law-enforcement supervision activities over 279 charity organizations, filing 154 cases and imposing administrative penalties on 105 organizations.

The thriving development of online charities was highlighted in the report. In 2019, online charity activities gathered about 10.8 billion clicks, follows, and participators across China, a country with over 900 million Internet users by March, the report noted.

"At the time when the law was enacted, the online charities were a new form of charity that hadn't fully developed in practice, but now it is well-known among the public and bringing new problems," said Zheng Gongcheng, head of the China Association of Social Security.

Compared with public fundraising projects by charity organizations, personal help-seeking activities can spread quickly through social media and reach more people. The value of each donation may be small, but the number of donations can be quite large on the Internet, said the report.

However, problems such as false information and non-transparent flow of donations were found in some cases and have aroused widespread concern in society.

"Online charities have enormous vitality and a promising future, but without corresponding laws and regulations and policy support, it may be damaging due to some questionable cases," said Zheng, who is also a deputy to the NPC Standing Committee.