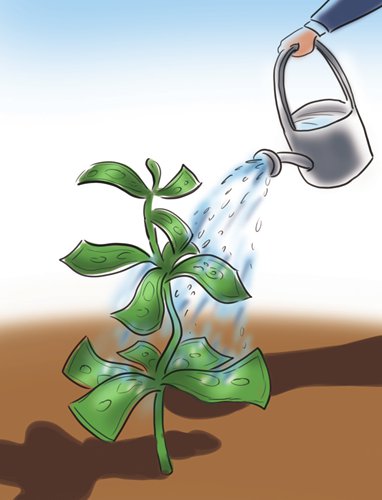 Until 2000, Ethiopia was perceived to be one of the poorest countries in Africa.It was consistently ranked the third-poorest in the world, with more than 50 percent of its population living below the poverty line. According to the International Monetary Fund, this was the highest poverty rate in the world. Only once in a while would Ethiopia be in the news for a good reason - when its athletes won a race in a global athletics competition.Yet what the country has been undergoing for the past 15 years can be called a miraculous metamorphosis. Ethiopia is no longer synonymous with poverty. Neither are its people sleeping hungry. Today, the country's infrastructural status is one of the best in Africa. Things look even rosier for Ethiopia as its economy is expected to grow at an average rate of 6.2 percent to 2022 despite a population of 102 million. The question to many, however, is how Ethiopia has managed to leapfrog other economic tigers in Africa despite political problems in the recent past.The answer to this question lies in China. As most African countries gambled between holding on to their traditional development partners - the West - or embracing China, Ethiopia enthusiastically welcomed Beijing. The warm reception has seen Chinese investors keenly investing their resources in Ethiopia. Through new investments from China, Ethiopia concentrated on making its services and manufacturing sectors thrive. Between 2000 and 2014, China provided more than $12 billion in loan finance. Through the friendship, numerous projects have been implemented. In 2009, the Chinese helped build the Tekezé Arch Dam with a capacity to generate 300 megawatts of electricity. It did not take long before Addis Ababa launched a metro rail system in 2015, thanks to a $400 million loan from China. In January 2017, a $4 billion railway project linking Ethiopia's capital, Addis Ababa to the Port of Doraleh in Djibouti was opened. Built and funded by Chinese companies, the 752-kilometer railway opened up landlocked Ethiopia for business with other countries. This is not all. Chinese firms are engaged in the construction of more than 70 percent of roads in Ethiopia, the Addis Ababa Ring Road being the prominent one. These investments have offered employment to thousands, which has stimulated the miraculous economic growth. Perhaps the most enduring memory of China in Ethiopia is its aggressiveness in turning around the once fading leather and textiles industries. With its 54 million cattle, 25.5 million sheep, 24 million goats, 7 million donkeys, 2 million horses and 1 million camels, Ethiopians wallowed in poverty for decades. This was largely blamed on the lack of necessary knowledge and technology to tender to the livestock.Having noticed this gap in a sector with huge potential, Chinese investors stepped in to assist in the implementation of the national livestock master plan which sought to make, among others, livestock rearing an enterprise. In this regard, Ethiopia's goal was to see leather exports grow from $123 million in 2012 to $500 million by the end of 2015. To make the grand dream a reality, Ethiopia provided an enabling atmosphere to investors who enjoyed duty exemptions on capital goods and construction materials, and five-plus years of an income tax holiday in the leather sector. This was augmented by the promise of free access to US and EU markets as well as cheap electricity.Excited by these incentives, China, through the China-Africa Development Fund, helped Ethiopia set up the Huajian Factory on the outskirts of Addis Ababa. The factory has helped Ethiopia add value to its leather. Today, the factory manufactures 6,000 pairs of shoes and boots a day. Made In Ethiopia footwear is being exported to Kenya, Uganda, Sudan, Rwanda, Zambia, South Africa, Ghana and Nigeria, besides the US, Asia and Europe.Helen Hai, vice-president of Huajian Group, once said that within a decade she wants Ethiopia to be a shoe country. Hai said: "I want to help local firms to grow because when local producers grow, the whole market does. If it is just myself growing here in five years' time, I will leave."China's boost to Ethiopia's leather industry, according to the Leather Industry Development Institute, has led to exports rising from $67 million to $115.4 million between 2004 and 2017.