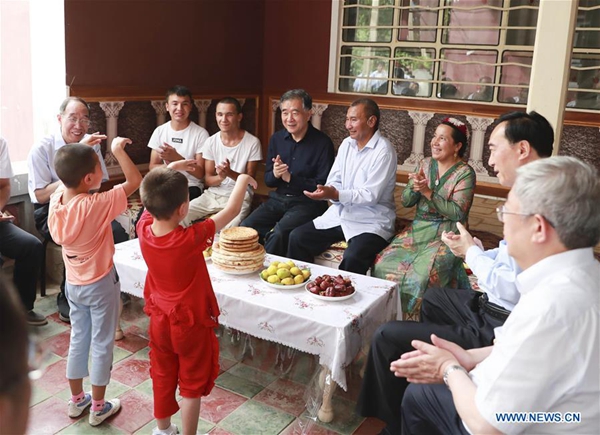 Wang Yang, a senior Party official, stressed comprehensive, targeted and long-term support to Xinjiang through the "pairing assistance" program at a meeting from Sunday to Tuesday.

The "pairing assistance" program should thoroughly implement the Party's policy for governing Xinjiang in the new era, said Wang, a member of the Standing Committee of the Political Bureau of the Communist Party of China (CPC) Central Committee, at the seventh national meeting on pairing-assistance to Xinjiang held in Hotan, a city in the south of Xinjiang Uygur Autonomous Region.

China has been implementing the "pairing assistance" program in Xinjiang since 1997, channeling financial support to Xinjiang from other regions of the country and sending cadres and professionals to work and hold tenures there.

The program should adopt a new vision for development, contribute to economic development and people's wellbeing, and help unify people, said Wang, who is in charge of coordinating the CPC Central Committee's work on Xinjiang.

Acknowledging the notable progress achieved in the new round of the pairing assistance program, Wang urged other regions in the country to send competent officials and professionals to Xinjiang and support the region in advancing local industrial development, improving people's livelihoods and alleviating poverty.

Efforts should be made to promote exchanges among different ethnic groups as well as between people in Xinjiang and other regions and encourage people from ethnic minority groups in Xinjiang to seek development in other regions of the country, he said.

Representatives from 19 provinces and municipalities involved in the pairing assistance to Xinjiang, together with those from local and central authorities, attended the meeting.

Wang visited an exhibition on the achievements of the pairing assistance program, inspected local organizations and companies and called on needy families during his stay in Hotan.