China hits back at Pompeo's fake Xinjiang and Tibet remarks 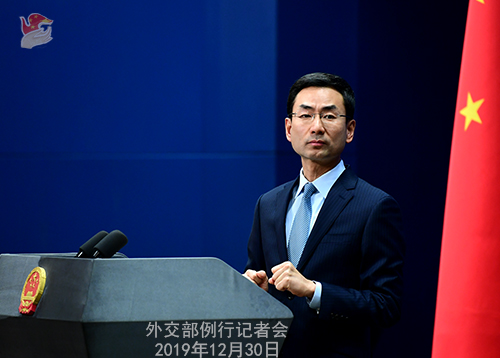 China's declaration made by Geng Shuang, a spokesperson from the Ministry of  Foreign Affairs, followed remarks made by Pompeo claiming that China is "attempting to erase its own citizens' faiths and cultures."

The US remarks are rumors and slanders, Geng told reporters, adding that current political stability, economic development, and ethnic unity in China's Xinjiang and Tibet are the most powerful response to Pompeo's remarks.

Geng pointed out that there are more than 24,000 mosques in Xinjiang, representing an average of one mosque for every 530 Muslims. In Tibet, there are over 1,700 religious sites and over 46,000 resident monks and nuns, Geng added.

The spokesperson has urged the US side to take care of its own affairs instead of interfering in other countries' internal affairs.

In 2019, the US has seen the highest number of mass killings on record since the 1970s, Geng pointed out, citing US media reports. A total of 41 incidents and 211 deaths were recorded in this year. Of the 41 cases in 2019, 33 involved firearms, Geng further added.