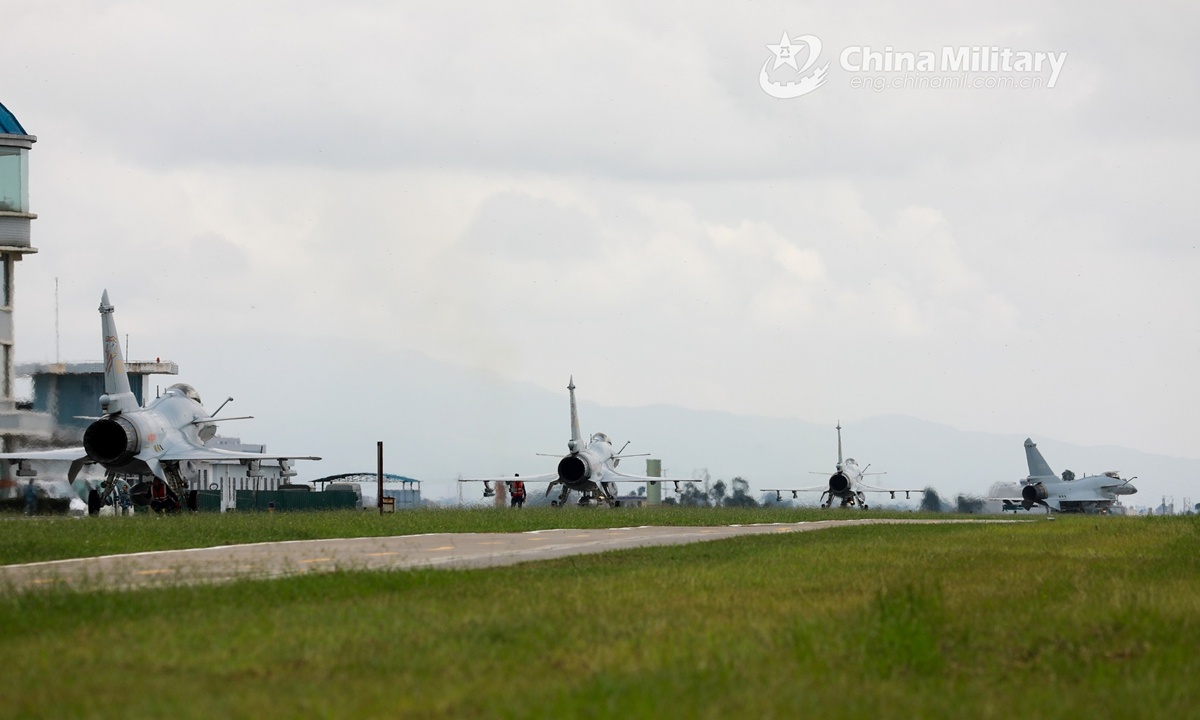 Fighter jets attached to an aviation brigade of the air force under the PLA Southern Theater Command taxi in close formation on the runway during a flight mission in early August, 2020. (eng.chinamil.com.cn/Photo by Wang Guoyun)

The Chinese People's Liberation Army (PLA) has announced four concentrated military drills across three major Chinese marine regions in the coming days, following a recent announcement of consecutive, realistic drills in the Taiwan Straits and at its northern and southern ends aimed at deterring Taiwan secessionists and the US.

Pressing the island of Taiwan from both the north and south ends, the simultaneous exercises in the South China Sea, the Yellow Sea and Bohai Sea will demonstrate the PLA's high level of combat preparedness, Chinese mainland military experts said on Sunday.

The drills are expected to hone in on the PLA troops' cross-regional joint combat capability, because if military conflicts break out, they will not likely be restricted to one sea region, but interconnected, they said.

According to a navigation restriction notice released by the local maritime safety administration in Guangzhou on Sunday, the PLA will hold military exercises in the waters of the South China Sea, off the southeast coast of South China's Guangdong Province, from Monday to Saturday.

Also in the South China Sea, military drills will be held in waters off Hainan Island's southeast coast, also from Monday to Saturday, the Hainan Maritime Safety Administration announced on Friday.

In the Yellow Sea north of the island of Taiwan and the East China Sea, the PLA is holding large-scale, live-fire exercises from Saturday to Wednesday in a vast region of waters east of Qingdao, East China's Shandong Province, and Lianyungang, East China's Jiangsu Province, said a notice issued by PLA Unit 91208 and local maritime authorities on Friday.

Additionally, live-fire drills will also be held in the Bohai Sea in a fan-shaped area from Monday to September 30, the Tangshan Maritime Safety Administration announced on Friday.

The four simultaneous military drills in three major Chinese marine regions mean the island of Taiwan will be hemmed in by PLA exercises from both the north and the south, and taking into account the drills in the Taiwan Straits and at its northern and southern ends announced on August 13, the PLA is conducting major exercises in all of its four major marine regions with Taiwan in mind in August, analysts said.

The announcements did not provide further details regarding the drills.

Song Zhongping, a Chinese military expert and TV commentator, told the Global Times on Sunday that the drills are likely to feature anti-ship, air defense and anti-submarine exercises.

The drills could also be joint exercises that feature multiple military branches based in different regions of the country, Song said, noting that this could mean that these exercises could be linked to the recent consecutive, realistic drills in the Taiwan Straits.

In addition to the PLA Navy, other forces like the PLA Army, Air Force, Rocket Force and Strategic Support Force could also be involved, analysts predicted.

The PLA should not only prepare for battle in the East China Sea and the Taiwan Straits, but in all Chinese marine regions, because the goal of these drills should be joint operations, and troops from Northern, Eastern and Southern Theater Commands should be capable of cross-regional joint combat, Song said.

If military conflicts in the Taiwan Straits break out, they will not likely be restricted to one marine region, but interconnected, Song stressed. 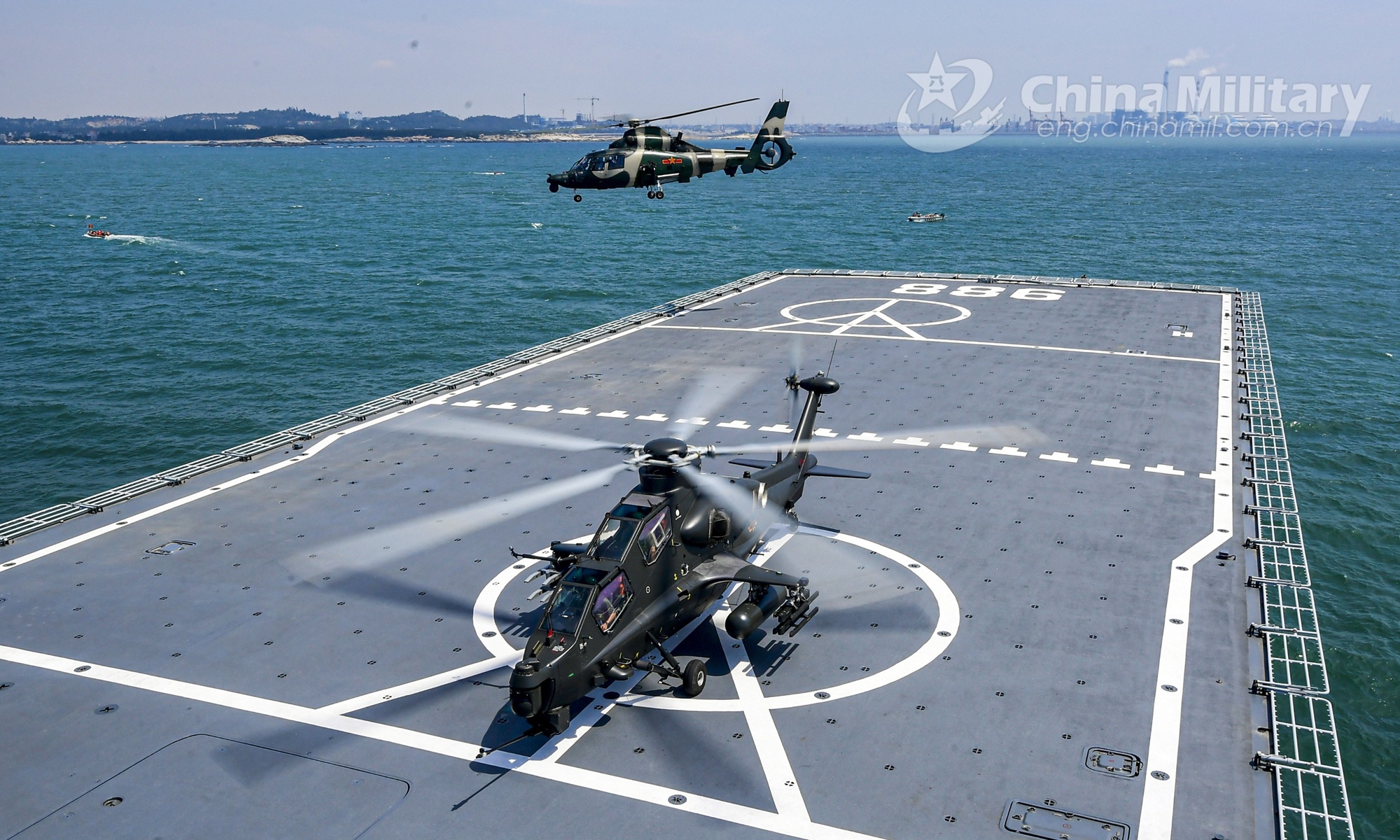 A Z-9 attack helicopter and a WZ-10 attack helicopter assigned to an army aviation brigade under the PLA 73rd Group Army lift off from the flight deck of the dock landing ship Yimengshan (Hull 988) successively during an inter-Services maritime coordinated training exercise with the PLA Navy at an undisclosed sea area on August 3, 2020. (eng.chinamil.com.cn/Photo by Li Shilong)

Chinese mainland analysts said that the PLA drills will not only demonstrate capabilities and act as deterrence, but also give strong responses to recent US military activities in the Taiwan Straits.

Even after the PLA's drills in the Taiwan Straits, the US continued to send warplanes and warships to the area, including the USS Mustin destroyer that sailed through the Taiwan Straits on Tuesday and multiple types of reconnaissance aircraft and B-1B bombers that flied near the island over the past week.

Additionally, the US Pacific Air Forces sent four B-1 bombers and two B-2 bombers in simultaneous missions on Tuesday in the Sea of Japan and the Indian Ocean, with some aircraft coordinating with the USS Ronald Reagan Carrier Strike Group near Japan at one point, US military newspaper Stars and Stripes reported on Wednesday.

It is also very rare for the PLA to announce so many drills in such a short period of time. While the PLA conducts frequent, routine exercises according to schedule, many of them are usually not revealed to the general public, analysts said. The concentrated announcements can be seen as a strong signal, they noted.

Li Jie, a Beijing-based naval expert, told the Global Times on Sunday that the concentrated PLA drills could serve as further warnings to Taiwan secessionists and the US, and show that the PLA is prepared and capable of effectively safeguarding national sovereignty and territorial integrity in all marine regions.

While the East China Sea would become the main battlefield in a possible reunification-by-force operation, the South China Sea and the Yellow Sea will likely also become involved. The drills in the Bohai Sea might involve the testing of new missiles, Li estimated.

The PLA drills are expected to be real combat-oriented, including how the maritime battle would flow, what kind of challenges might occur, and what actions the militaries of the island and the US might take, Li said, noting that Taiwan secessionists and the US should not have any illusion that their provocative actions hitting below the Chinese mainland's bottom line can succeed.