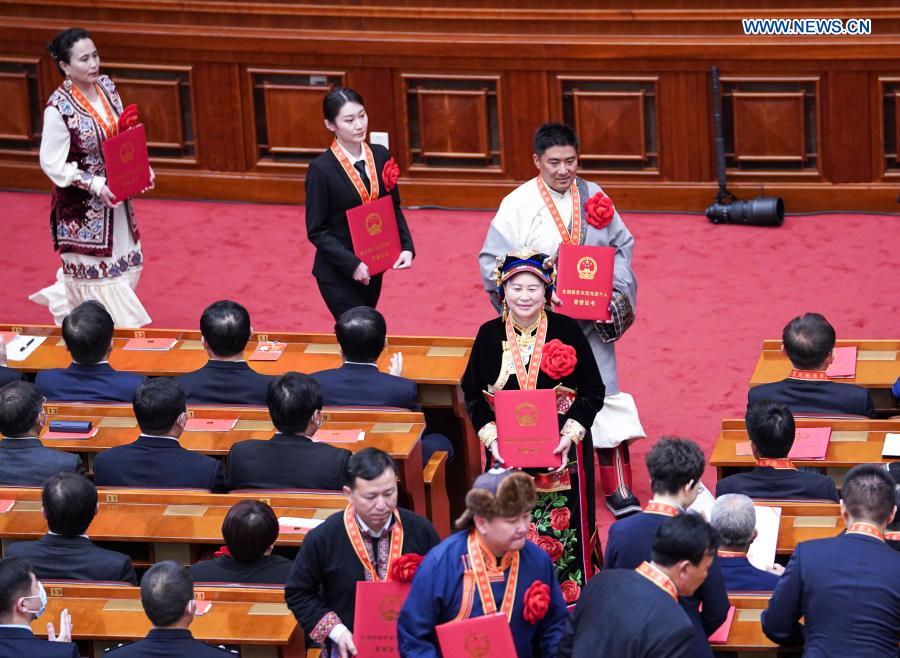 A grand gathering is held to mark the country's accomplishments in poverty alleviation and honor its model poverty fighters at the Great Hall of the People in Beijing, capital of China, Feb. 25, 2021. (Xinhua/Yin Bogu)

Chinese President Xi Jinping on Thursday announced that China has eradicated extreme poverty at a national commendation conference, during which he honored those who contributed to this remarkable achievement in human history.

Xi said that 770 million rural residents have been lifted above the current poverty line since the beginning of reform and opening-up over 40 years ago.

Ten individuals and 10 groups were honored as "role models" for their contributions to the poverty alleviation cause.

- Bai Jingying, inheritor of Wangfu Embroidery and head of the embroidery industry-driven poverty alleviation team in Horqin Right Wing Middle Banner in north China's Inner Mongolia, has held many workshops to teach ethnic Mongolian embroidery to rural women as way for them to generate income.

- Liu Hu, the current director of the Water Conservancy Bureau of Jiashi County, Kashgar Prefecture, Xinjiang Uygur Autonomous Region, has been committed to bringing clean drinking water to the impoverished population and solve water shortages in the local area.

- Li Yu with the Chinese Academy of Sciences has spent the last 30 years researching the science of fungi and edible fungus engineering technology and industrialization in Jilin Province.

- Zhang Xiaojuan, who died at the age of 34 in a traffic accident while on duty on October 7, 2019, devoted her life to local poverty alleviation work. She was the deputy chief of the Zhouqu County's poverty alleviation and development office in northwest China's Gansu Province and had visited every single household in 87 poor villages to solve their difficulties.

- Zhang Guimei is a teacher who dedicated 40 years of her life to helping and motivating young girls from impoverished families in the mountainous areas of southwest China's Yunnan Province to pursue higher education.

- Zhao Yafu is an agricultural researcher who worked in the Chinese countryside for over 48 years, teaching farmers advanced planting techniques and helping them improve their output and income.

- Jiang Shikun, the late former secretary of the CPC Committee of Qinglong County, Guizhou Province, was a pioneer in devising plans for targeted poverty alleviation in the county and promoting rural tourism. He died of a heart attack in 2016.

- Xia Sen, a retired researcher from the Bureau of Foreign Affairs of the Chinese Academy of Social Sciences, has been involved in promoting children's education in poverty-stricken areas. She has sponsored 182 students from disadvantaged families to attend college.

- Huang Wenxiu, the Party chief of Baini Village in Leye County in Guangxi Zhuang Autonomous Region, helped 103 poor households shake off poverty during her tenure between 2018 and 2019. On June 17, 2019, Huang was killed in a mudslide en route to check on villagers.