CHINA China hopes Afghanistan can find its own path: Envoy

China hopes Afghanistan can find its own path: Envoy

An article by Yue Xiaoyong, China’s special envoy for Afghan affairs of the Ministry of Foreign Affairs, was published by the UK National Committee on China Guest Contributor Programme on Wednesday with the headline "What are the implications of the US withdrawal from Afghanistan?" 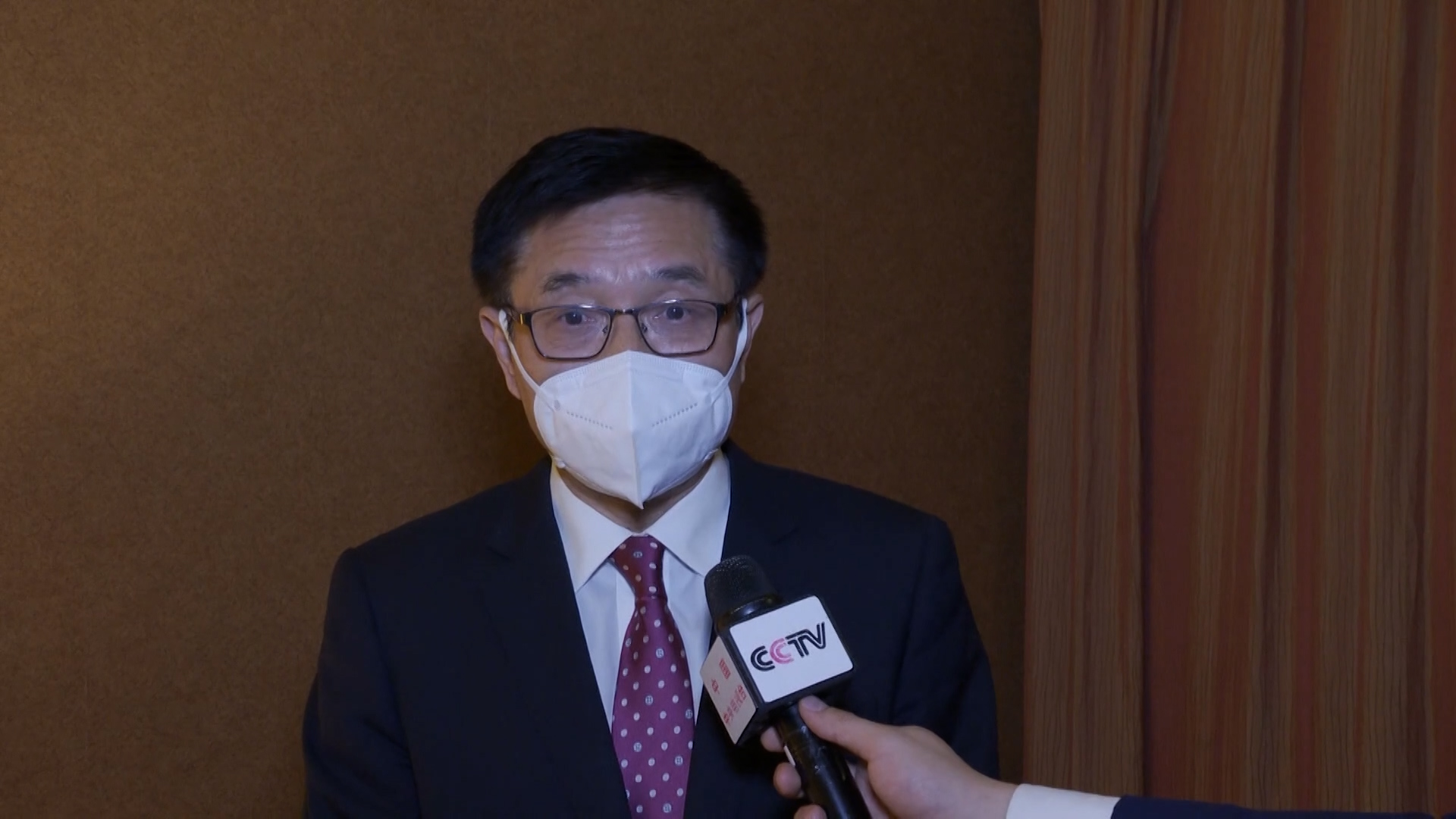 The article shared China's views on the withdrawal of US troops from Afghanistan and its propositions on the Afghan issue.

Yue pointed out that the situation in Afghanistan demonstrated that using power politics and military means to solve problems in regional hotspots, or meddling in another sovereign country’s internal affairs, would go nowhere.

“In fact, it creates more problems than it solves,” Yue wrote.

US policymakers should draw the right lessons from the situation and earnestly correct their mistakes, Yue said.

The Taliban had become an important political and military force in Afghanistan, the article said. The best course was to have dialogue, engage and work hard with the Taliban toward a peaceful reconciliation and allow a government inclusive of all parties to be established.

“It is a new start historically,” Yue wrote. “For the first time in the past 20 years they, the Afghan people, are able to hold the fate of Afghanistan in their own hands. It is an opportunity for them.”

China respected Afghanistan’s sovereignty, territorial integrity and the right of the Afghan people to independently handle the affairs of their nation, he said.

China hoped Afghanistan could seize this opportunity to find a path supported by its own people which suited Afghanistan’s characteristics and development route.

In this context, China was willing to offer help and was prepared to work together, he wrote.

What are the implications of the US withdrawal from Afghanistan?

Looking at the current situation in Afghanistan, the main cause of the chaotic disaster and crisis is the hasty, irresponsible withdrawal of US and NATO troops without any real responsible arrangement for the stability and peace of the country. The US should draw lessons from the last 20 years. It has put in extensive resources, spent large sums of money and suffered several thousand casualties in Afghanistan, which has itself incurred drastic damage and a huge cost in human life. Despite this, the chaotic situation that we see today has still arisen, with terrorist groups growing; the country becoming poorer; narcotics and other problems only intensifying. Not only is this an American military failure, but it is also a failure of America’s international politics and American credibility. At the core of all this is the US failure and mistake in attempting to use power and military means to impose their own political and social model onto another sovereign nation and its people.

The current situation in Afghanistan clearly shows that using power politics and military means to solve problems in regional hotspots or meddling in another sovereign country’s internal affairs will get you nowhere. In fact, it creates more problems than it solves. Over the past 20 years, countries such as the US have continually sought to transplant their own models to sovereign nations. This has led to numerous disasters and troubles: not only in Afghanistan but in other places too. As such, US policymakers should draw the right lessons from the situation and earnestly correct their mistakes.

In dealing with the current crisis in Afghanistan, as well as in the future, the US needs to avoid repeating these same mistakes. This is especially necessary as the US remains an important participant in resolving the Afghanistan issue.

When dealing with regional conflicts and other international affairs, it is important that all countries, and the US in particular, genuinely return to the UN charter and follow the core objectives and goals of the charter as a foundation. In the whole process of dealing with the Afghan crisis, the principle of “Afghan-led, Afghan-owned” should always be followed and the sovereignty and independence of Afghanistan respected. There has been much commentary and criticism of the Taliban’s past and many predictions of how they will act in the future. Some reports are positive about the change in the organisation, while others remain doubtful. The right question is not whether or how much they have “really” changed. Instead, it is whether you respect their own sovereignty and can refrain from interfering in their internal affairs while at the same time creating a good international environment to help them by encouraging positive trends which lead to peace, reconciliation and stability in the country. This will allow for the establishment of an inclusive and open political structure with friendly relations with the rest of the world, built through dialogue and political means. In fact, the Taliban has already become an important political and military force in Afghanistan. It is a new start historically. We respect Afghanistan’s sovereignty, territorial integrity and the right of the Afghan people to independently handle the affairs of their nation. For the first time in the past 20 years they, the Afghan people, are able to hold the fate of Afghanistan in their own hands. It is an opportunity for them.

In this ongoing situation, the best course going forward is for us to have dialogues with the Taliban; engage with them; and together with them work hard to facilitate peaceful reconciliation in Afghanistan and allow a government inclusive of all parties to be established. The Taliban emphasise that they have been trying to unite all parties to reconstruct the country; that they must work with different political forces to reach peace and reconciliation. As such the Taliban have engaged in dialogue and are continuing to do so, now, after the US completed its withdrawal on the 30th August 2021. It is encouraging to see that groups from different traditions, tribes, ethnicities and parties are coming together. Let the Afghan people, together with neighbouring countries and other countries in the region, work together to realise Afghan internal peace, reconciliation and reconstruction.

This will enable neighbouring and international partners to share a prosperous future through peaceful mutual beneficial cooperation constructively.

While words and promises are heard, deeds need to follow. So far, as the Taliban have entered Kabul and recovered many cities across the country, some positive trends are present already. The situation in Afghanistan is a crisis, but also the biggest opportunity in perhaps 70 years for Afghanistan and the Afghan people to grasp their own destiny. We must allow the Afghan people to make use of this opportunity to achieve domestic peace and overcome challenges such as longterm stability, national reconstruction, the creation of an open and inclusive government and - importantly – the clear removal from the nation of terrorist organisations. It is hoped that Afghanistan can seize this opportunity to find its own path, a path that is supported by its own people and suits Afghanistan’s own characteristics and development route. The Afghan people are heroic people, as Chairman Mao Zedong used to put it, and have never yielded to foreign aggression.

They are now very keen to learn from the development experience and success of neighbouring and regional countries. As we have always said, it is important that they find their own appropriate development model, so that they can create their own domestic stability, peace and reconstruct their country. In this context, we are willing to offer help and are prepared to work together. China is not only ready to open up and develop our own country, but is also willing to carry out mutually beneficial cooperation. We have already worked with partners in neighbouring countries in the region and with the international community for that purpose. Both neighbouring and regional nations are ready to share their opportunities with Afghanistan, having enjoyed successful cooperation with each other and with China in the Belt and Road Initiative and from each countries’ own development cooperation initiatives and projects (such as connectivity projects and energy delivery programs). I have heard many good ideas and plans from them.

For example, in Pakistan, the ChinaPakistan Economic Corridor has been established. People there are contemplating how to guide its economic development so that Afghanistan can share in its benefits, which is of great interest to both parties. The Chinese government and our Party leadership have always put the Chinese people first in our internal and external policies. The peace of our nation and the safety of our people is the core mission for both our overall foreign policy and our work with the Afghan people.

China is Afghanistan's biggest neighbour with a 92 km shared border. We are naturally very concerned about Afghanistan’s peace and stability and have great sympathy for their suffering both from terrorism and from the fight against it. We are paying attention to how Afghanistan navigates through this crisis. In particular, close attention is being paid to how effective the crackdown on terrorism is. China faces the threat of a typical terrorist organisation, the East Turkestan Islamic Movement (ETIM). This UN Security Council-listed and internationally watched terrorist group has committed many terrorist acts and crimes against China, as well as against other countries and peoples. It is known in both China and in the international community that ETIM operates within Afghanistan. The Taliban and other stakeholders in Afghanistan have promised that they will completely break away from all terrorist groups and resolutely fight terrorist groups within Afghanistan to the very end.

The Kabul airport terrorist attacks clearly show that the security threat within Kabul and Afghanistan is real and severe. We must watch the development of the situation and ensure a soft landing and a smooth transition of the situation in Afghanistan.

Three lessons need to be learned from the terrorist attacks. First, peace and stability in Afghanistan need to be achieved as soon as possible during this crucial time. Second, effectively fighting and cracking down on terrorism is vital. Afghanistan cannot once again become a haven for terrorist organisations. The Taliban and all stakeholders in the country must effectively carry out efforts to eliminate the ETIM. Thirdly, in the international arena, the US should totally cast away its “double standards” in this field and implement all required measures.