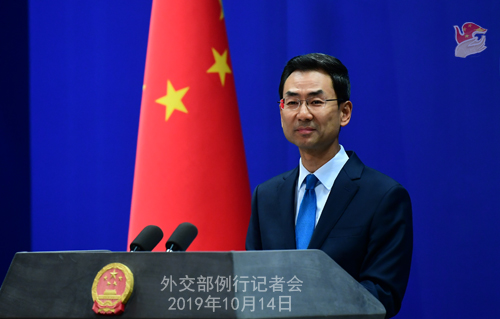 BEIJING, Oct. 14 (Xinhua) -- China said on Monday that it hopes the European Union will continue to maintain investment market openness and create a fair, transparent, stable and predictable business environment for companies investing in the EU, including Chinese enterprises.

Chinese Foreign Ministry spokesperson Geng Shuang told a press briefing when commenting on a report on the development of Chinese enterprises in the EU, which was published on Oct. 11. The report was drafted jointly by the China Chamber of Commerce to the EU and Roland Berger Management Consultants.

Geng said, currently the EU-based Chinese companies see overall good performance and an increasing number of Chinese firms have established their R&D centers and factories in the EU, adding that Chinese companies' investment there and cooperation with local partners have boosted employment and improved the livelihood of local people.

Geng said that the European countries have always adhered to the principle of market economy and upheld trade and investment liberalization and facilitation.

"We hope that the EU side would earnestly heed the opinions and calls from Chinese companies, continue to keep an open investment market and create a fair, transparent, stable and predictable business environment for companies investing in the EU, including Chinese enterprises" Geng said.

Maintaining openness and inclusiveness and continuing to expand cooperation between China and the EU on the basis of mutual respect and win-win benefit, not only serves the interests of both sides but also injects more positive energy and stability into the world, he said.