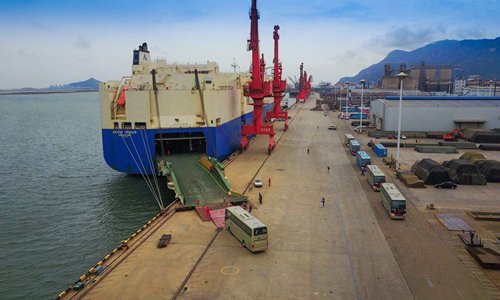 China has undergone profound changes, with notable headway made in the process of reform and opening up, Capunay told Xinhua in an interview ahead of the 70th anniversary of the founding of the People's Republic of China.

Throughout his 46 years as a diplomat, Capunay spent 24 years in Asia, during which he has served as Peruvian ambassador to Singapore, Japan and China successively.

Recalling his first visit to China in 1976, the former ambassador said that people were indeed not well-off at that time -- an impression fundamentally changed since the Asian country implemented reform and opening up.

China was making progress at an increasingly faster pace each time he visited, he said, adding that when he was ambassador to China in 2014, people's livelihoods have significantly improved compared with his first visit.

China's reform and opening up has greatly unleashed the vitality of its economy, the ambassador said, adding that in just four decades, China has become the world's second-largest economy.

The country has not only managed to provide enough food and clothing for its people, but has also embarked on a path of comprehensively building a moderately prosperous society in all respects, inching towards greater prosperity and strength, Capunay said.

Such an economic success story is worth learning, the ambassador said.

In parallel with its domestic development, China has also made significant contributions to promoting international cooperation, Capunay said.

He cited the China-proposed Belt and Road Initiative (BRI) as an example, saying China is chartering a new path for countries to work together for win-win results, with the BRI as an important cooperative platform.

China not only sets out the plan, but also financially supports infrastructure projects within the BRI framework, he stressed.

In April, Peru and China signed a memorandum of understanding at the second Belt and Road Forum for International Cooperation held in Beijing.

The cooperation with China will help drive the Peruvian economy, and the Latin American nation should seize opportunities to improve its infrastructure, for instance, in the fields of transport, telecoms and ports, the diplomat said.

In the era of globalization, cooperation is the only way forward to benefit all, he said, adding China is a strong supporter of the international free trade system.

As China actively strengthens its economic and trade relationship with Peru, the latter has become the second-largest Latin American destination for Chinese foreign investment, he said.

The Peru-China free trade agreement effective in 2010 has lifted their trade ties to a higher level, and their ongoing negotiation on upgrading the trade deal is expected to inject new vitality into deepening bilateral cooperation, he said.