BEIJING, April 17 (Xinhua) -- China's National Cultural Heritage Administration has vowed to strengthen the protection of the Great Wall, which is more than 21,000 km long. 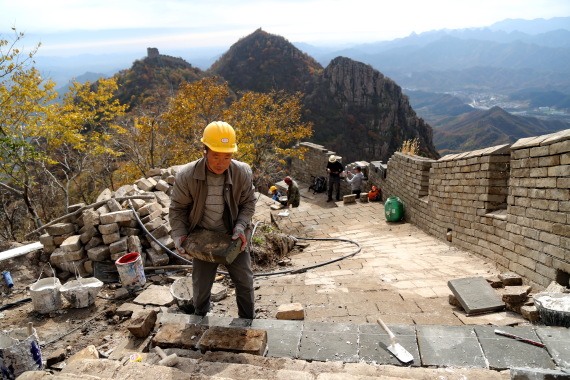 A section of the Great Wall in Qinhuangdao, north China's Hebei Province is under restoration. (Photo: Xinhua)

Noting the importance of both routine maintenance and urgent repair of endangered sites on the Great Wall, Song said his administration would urge local authorities to check and find sites in need of repair and improve protection work.

"Some key sites suitable for visits can be opened to the public on a moderate scale," Song said.

The Great Wall, a UNESCO World Heritage Site, consists of many interconnected walls, some dating back 2,000 years.

There are currently more than 43,000 sites on the Great Wall, including wall sections, trench sections and fortresses, scattered in 15 provinces, municipalities and autonomous regions, including Beijing, Hebei and Gansu.

At the Tuesday event, reporters from a number of media outlets were invited to visit the Jiankou Great Wall, which is under repair until the end of June, in the northern Huairou District of Beijing.

With a total length of 7,952 meters, the Jiankou Great Wall was built during the Ming Dynasty (1368-1644) on steep mountains and is left with incomplete walls and ruins after erosion and wars over the past hundreds of years.

According to Shu Xiaofeng, director of the Beijing Cultural Heritage Administration, the repair will only renovate walls that are likely to fall or endanger people passing by, while the appearance of other safe walls will not be changed.

"We always follow the principle and idea of minimum intervention, insisting on solving problems harming the Great Wall's safety, especially the stability of its structure, by minimum human intervention," Shu said.

The existing relics of the Great Wall are results of human activity and natural factors over the past thousands of years, said Song Xinchao, who stressed preventing improper interventions and putting an end to "rebuilding the Great Wall."

In January, the Ministry of Culture and Tourism and the National Cultural Heritage Administration jointly released a comprehensive conservation plan to establish a long-term mechanism for the conservation and utilization of the Great Wall.