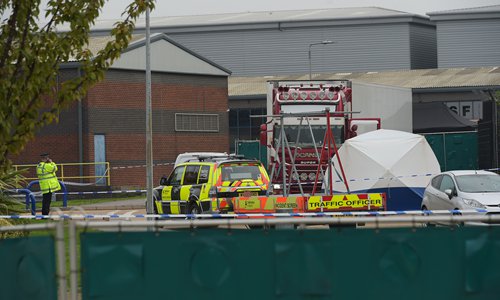 Police close off the Waterglade industrial estate in Thurrock, Essex after 39 bodies were found in the back of a lorry believed to have come from Bulgaria. (Photo: IC)

The Chinese Embassy in London is in close contact with the British police to seek clarification and confirmation of a case involving 39 Chinese nationals found dead in a truck in Essex.

The embassy said in a statement on Thursday that it had read "with heavy heart" reports of the deaths of 39 people in Essex.

A Chinese Foreign Ministry spokesperson said in an online statement that it was in the process of verifying the reports. As of press time, the ministry said nothing more could be released.

The bodies were found in the back of a refrigerated truck trailer in an industrial estate near London on Wednesday, ITV News reported on Thursday.

The Essex Police said in a statement Thursday that they were working on piecing together the case, which was "the largest murder investigation in our force's history."

The statement said they were undertaking extensive and thorough inquiries, meaning they "might not have all the answers straight away."

The police also provided hotlines for families and friends of the victims.

The news garnered more than 250 million views and 950,000 comments within one hour on China's Twitter-like Sina Weibo social media platform.

Net users expressed condolences for the victims and called for a comprehensive investigation. Many wondered where the victims were from and why they were on the truck.

Detectives said the trailer containing the victims arrived at Purfleet from Zeebrugge of Belgium at around 12:30 am on Wednesday, while the front section came from Northern Ireland, ITV News reported.

Driver Mo Robinson, 25, from Northern Ireland has been arrested on suspicion of murder, reports said. Essex police were unavailable for comment.

The trailer temperature could be as low as -25 C inside, according to the Mirror, implying that the 39 victims could be frozen to death.

The truck was reportedly registered in Bulgaria through a company owned by an Irish citizen.

The case immediately echoed previous human trafficking cases involving Chinese nationals to other countries including the Dover tragedy in 2000.

In 2000, the bodies of 58 Chinese illegal immigrants were found in a truck in Dover. Two young men survived the ordeal.

That truck was also driven from Zeebrugge to the UK and later confirmed to be a part of a Chinese gang smuggling route.

A driver from the Netherlands and nine Chinese people were sentenced in that case, Dutch news sites reported.

In a latest headline-grabbing case, a US citizen was charged with the smuggling deaths of three Chinese migrants in the boot of his BMW two days after he crossed the border from Mexico, including a mother and her 15-year-old son, the authorities said on September 13.

In October, more than 10 Chinese being smuggled from East China's Fujian Province died in a shipwreck in the Caribbean.

Many Chinese immigrants leave via East China's Fujian Province and their destinations are usually the US, the UK, Western European countries or Japan.