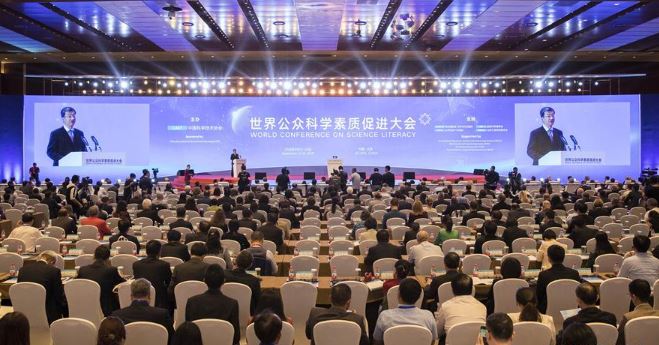 BEIJING, Sept. 19 (Xinhua) -- A recent survey by the China Research Institute of Science Popularization shows that the proportion of Chinese scientifically-literate citizens has increased to 8.47 percent, up 2.27 percentage points from three years ago.

The survey was released during the three-day World Conference on Science Literacy in Beijing, which concluded Wednesday.

The level of public science literacy matches regional economic and social development. According to the survey, well developed provincial-level regions had a higher proportion than the national average, and major cities such as Shanghai and Beijing were on the top, reaching over 20 percent.

"The gap in science literacy between urban and rural population is narrowing," said He Wei, researcher with the institute.

"The younger generations, those born in the 1980s and 1990s, have a high proportion of science literacy, which lays a foundation for building an innovative country," He said.

Most Chinese are getting their science news or knowledge through television and online platforms, reaching 68.5 percent and 64.6 percent respectively, the survey said.

Wang Kangyou, director of the institute, said that the main reason for the growth was the government encouraging and investing in the promotion of science-based knowledge.

According to Wang, in 2016 China had 920 science and technology museums with 2.8 million square meters of exhibition areas in total, triple the number of 2006, and 1.85 million people working on popularizing science, an increase of nearly 230,000 from a decade ago.

China aims to have 10 percent of its population become scientifically literate by 2020, but inequity in scientific literacy is still a challenge.

To promote China's science popularization, the role of the market also needs to be strengthened, Wang said.