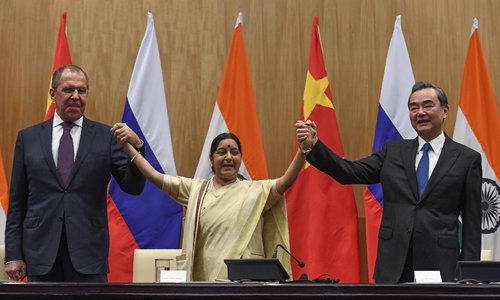 The foreign ministers of China, Russia and India issued a joint communiqué on combating terrorism following their annual meeting in New Delhi on Monday, leading experts to suggest it's a good step for the three major non-Western powers to find some common ground and preserve the unity of the BRICS and Shanghai Cooperation Organization (SCO).The 15th ministerial meeting between the three countries was held in New Delhi between Chinese Foreign Minister Wang Yi, Russian Foreign Minister Sergei Lavrov and Indian External Affairs Minister Sushma Swaraj.  Their joint communiqué urged all countries to take adequate measures to prevent terrorist activities."The timing of this meeting is critical because the relationship between China and India has been seriously damaged by the border issue this year. It is essential for these three major non-Western powers to make joint efforts to minimize the damage," Yang Jin, an expert on Russian studies from the Chinese Academy of Social Sciences, told the Global Times on Monday.Yang believes Russia is the only country in the world in a position to mediate the China-India disagreement, because it has strong ties with both China and India. "That's why this tripartite ministerial meeting is an important platform. Both Beijing and New Delhi hope Moscow can play the role of mediator," Yang said. The 15th Russia-India-China trilateral meeting comes a month after Indian officials met their counterparts from Australia, Japan and the US to discuss the revival of the "Quad," an alliance focused on the Indo-Pacific region, which many in China believe is aimed at countering China's rise. This is another reason of why Monday's meeting was important, said Yang. "Russia has been isolated by the West and faces strong hostility from the US and the UK. The main strategic pressure for China is still from the West, so both Beijing and Moscow need to pull New Delhi back a little bit and balance the movements made by the US, and safeguard their cooperation mechanism in the SCO and the BRICS."India is being courted by the US and Japan on one side and China and Russia on the other, said Yang.  Avoiding disunityIn their communiqué Russia, China and India on Monday condemned all forms of terrorism and reaffirmed their determination to prevent and counter it. The three countries also said those committing, organizing, inciting or supporting terrorist acts must be held accountable and brought to justice, PTI reported."China, Russia and India are facing different threats from different terrorist groups in their respective regions. In principle, counter-terrorism is the best area for cooperation. Compared to other areas, they have few differences on counter-terrorism," Hu Zhiyong, a research fellow at the Institute of International Relations of the Shanghai Academy of Social Sciences, told the Global Times on Monday."Counter-terrorism cooperation between the three countries could be highly complementary. For example, we have different information and intelligence regarding various terrorist groups in different regions, so intelligence sharing will benefit everyone," Yang said.Hu believes the danger of disunity within the SCO and the BRICS is broader than the negative influences from the West. He says both Russia and India have their own plans to balance China's increasing influence.Hu said Russia invited India to join the SCO to balance China, and India hopes China will use its unique influence to pressure Pakistan. "China has to be aware of this, we should never be used by India to harm China's best friend Pakistan," said Hu. "The China-Pakistan Economic Corridor is the flagship project for the Belt and Road initiative, and if it succeeds, we will provide an excellent example of using development to resolve security problems," Hu noted.