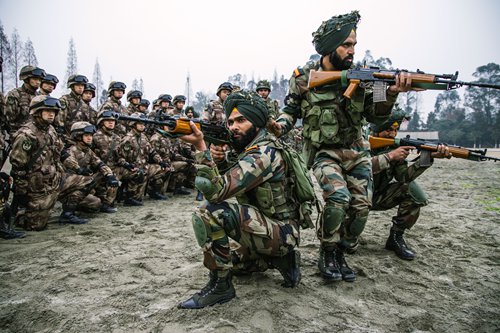 Warming ties between China and India will not be affected by the US Navy chief's recent visit to India, which is widely considered the latest US move to woo the South Asian country that would only lead to regional instability and chaos, experts said on TuesdayUS Navy chief Admiral John Richardson met with his Indian counterpart Chief of Navy Sunil Lanba and other senior officials, such as Defense Secretary Sanjay Mitra and Chief of the Air Chief Marshal B. S. Dhanoa, on Monday during his three-day visit to India, The Times of India reported on Tuesday. Major issues discussed during the visit included operations and exercises, training interactions, information exchanges, capacity building and capability enhancement, the Indian Navy said.Prior to Richardson's trip, US Secretary of State Mike Pompeo said at the Claremont Institute in California on Saturday that the US was "banding together with like-minded nations like Australia, India, Japan and South Korea to make sure that each Indo-Pacific nation can protect its sovereignty from coercion.""Pompeo's statement is a typical Cold War thinking narrative and does not align with the theme of peace and development in this region. US should discard the obsolete notion of Cold War thinking since China-US relations are deeply interdependent," Qian Feng, a research fellow at the National Strategy Institute of Tsinghua University, told the Global Times on Tuesday.Richardson's visit to India came shortly after the Indian Navy for the first time joined the US Navy, the Japan Maritime Self-Defense Force, and the Philippine Navy for a sail-through of the South China Sea.The US is trying to woo India to contain China for its own national interests and has brought nothing but instability to the region, including the South China Sea, Qian said.However, it is unlikely for India to be kidnapped by the US, as its own strategic interests are based on India's diplomatic tradition, national orientation, and national interests, Lan Jianxue, Deputy Director of Department for Asia-Pacific Studies at the China Institute of International Studies, told the Global Times. China-India relations are enjoying a sound momentum of development, Lan noted.However, China should also pay close attention to closer US-India relations to make sure their cooperation would not affect China's national security, Lan said.