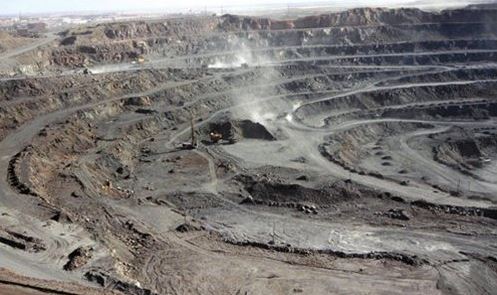 China indicated Tuesday night that it may weaponize its rare earths in an escalation of the trade war with the US, according to a Chinese official from the country's top state economy planner."If any country wants to use products made of China's rare earth exports to contain China's development, the Chinese people would not be happy with that," said a spokesperson from the National Development and Reform Commission (NDRC), China's state planner, when asked about whether rare earths will be used as a countering weapon in the China-US trade war. Industry insiders said that the comment, in a rare case, sends an implicit signal that China does not hesitate using rare earths as a weapon against the US amid the escalating trade war and US containment of Huawei. The comments were made after Chinese President Xi Jinping visited on May 20JL MAG Rare-Earth Co, a Ganzhou-based high-tech company specializing in research and development (R&D) into permanent rare-earth magnetic materials, to learn about the company's operations and the development of the rare earth industry, the Xinhua News Agency reported. China is the world's largest rare-earth producer, and many developed countries are big consumers of the material. Strengthening the development and utilization of rare earths benefits China and the world, said the NDRC official.China dominates global supply chains. The country accounted for at least 71 percent of mined output last year and a higher ratio of processed rare earth compounds, and the US sourced 80 percent of its rare earth imports from China from 2014 to 2017, according to the Reuters report.Scaling down rare-earth exports to the US is "a smart hit" against the US crackdown on Huawei and the US-China trade war, Wu Chenhui, an independent rare-earth analyst, told the Global Times on Tuesday.  The latest move is also seen as China's retaliation for the US export control of its high technologies to China, and as a strategic material, the export of China's rare earths has to be adjusted now, analysts said.  "It could inflict substantial damage on the US military and tech industry, as rare earths are a key material in manufacturing chips, radar, fiber optics, night vision goggles, missile guiding systems, and tank armor," he said. "Just name a few big name US companies like Apple, Qualcomm and Raytheon… they could suffer a lot from the countermeasures."Ganzhou has incomparable and irreplaceable rare earth resources, with its heavy rare earths accounting for 80 percent of the country's total storage. In recent years, by integrating market resources and increasing R&D investment, Ganzhou has achieved a leading level of separation and smelting technology in the country. Its industrial scale accounts for one-third of the national total and has become an important production base and new material industry for rare-earth smelting products in China, said the NDRC official. In 2018, the above-designated scale enterprises in Ganzhou in the rare earth industry achieved a revenue of 26 billion yuan ($3.6 billion) from their main businesses, said the official."As the world's largest supplier of rare-earth materials, China has always adhered to the principle of openness, synergy and sharing to promote the development of the rare-earth industry. On the one hand, we adhere to the principle that rare-earth resources give priority to domestic needs; on the other hand, we are also willing to meet the legitimate needs of countries around the world for rare-earth resources," the NDRC official noted."We are pleased to see that China's rare-earth resources and products can be widely used in manufacturing various advanced products to better meet the needs of people around the world for a better life," the NDRC official said.