In the Talatan area of Gonghe County, Qinghai Province, rows of photovoltaic panels shine out from the grassland, with sheep frolicking underneath them. Five years ago, this place was a desert plagued by sandstorms, where sheep did not have enough to eat and could barely survive.

"In the past, overgrazing led to less grass in the area, which little by little caused the area to become desertified," said Ma Shengxing, a 50-year old villager living in Gonghe County. He recalled that the desertification of pastures resulted in a low survival rate of his sheep, which, numbering only a few dozens, barely earned his family a few thousand yuan a year.

Since the 'photovoltaic sheep' were introduced to Talatan, however, the number of sheep Ma keeps has risen to more than 200. The family's annual income has reached over 30,000 yuan, and the quality of life has changed tremendously. These improvements have been the result of the country's photovoltaic poverty alleviation projects, which have promoted not only local social and economic development, but also facilitated ecological restoration. 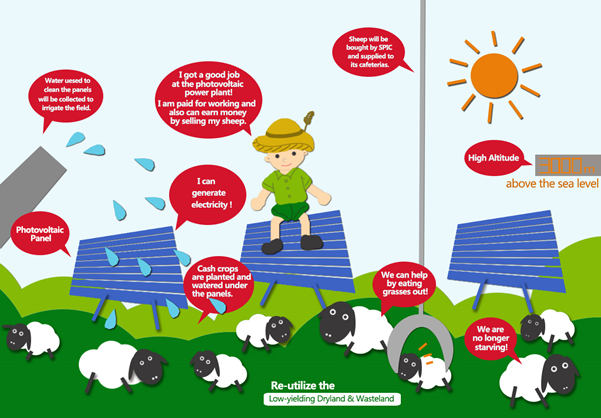 Back in 2014, a subsidiary company of the State Power Investment Corporation creatively planted seeds of grass under the solar panels in its photovoltaic park in Talatan. The company also recycled the water used to clean the solar panels to irrigate pastures, thus restoring the area into a vast land of green.

As the grass grew higher and higher, it started to block solar panels and affect power generation. To solve the problem of overgrown grass, the staff working in the park came up with another innovative idea. They invited local farmers like Ma to bring their sheep to graze under the photovoltaic panels; thus the "photovoltaic sheep" was born.

Today, there are more than 2,000 "photovoltaic sheep" in the park, and all of them have been bought out by company cafeterias, with the farmers pocketing the income. This model has also created security, maintenance, cargo handling, civil engineering and other employment opportunities for surrounding villages.

China has set an ambitious goal in its 13th Five Year Plan to eradicate poverty by 2020. Over the past six years, from the poverty-stricken minority villages to remote areas lacking self-development opportunities, China has lifted more than 82 million people out of poverty through unremitting and concerted efforts from the government and other sectors of the society. There is every reason to believe that innovative methods such as the photovoltaic poverty relief program will continue to bear fruit as the most populous country in the world endeavors to shed poverty entirely.