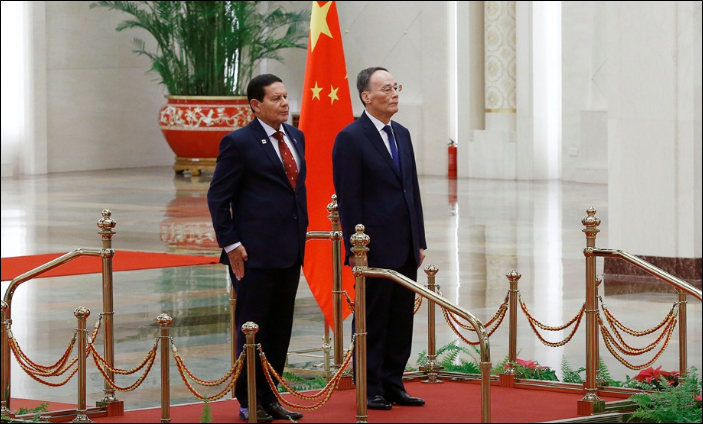 Chinese Vice President Wang Qishan (R) and Brazilian Vice President Hamilton Mourao listen to the national anthems during a welcome ceremony at the Great Hall of the People in Beijing, China, May 23, 2019.(Photo: CGTN)

China has invited Brazil to participate in the second China International Import Expo (CIIE) later this year and Brazil encourages its companies to take part, according to a statement released on Thursday following a meeting between Chinese Vice President Wang Qishan and his Brazilian counterpart Hamilton Mourao.

The two leaders jointly held the fifth meeting of the China-Brazil High-Level Coordination and Cooperation Committee in Beijing.

A total of 172 countries, regions and international organizations and more than 3,600 enterprises participated in the first CIIE, held on November 5-10 in east China's Shanghai Municipality. It was the world's first import-themed national-level expo. The second CIIE will also be held in the city this November.

During the meeting, Wang said mutually beneficial cooperation between China and Brazil in various fields is on a "fast track" after 45 years of diplomatic relations.

Calling Brazil a "good friend" and "good partner" of China, he stressed China is willing to make joint efforts with Brazil to plan and expand their cooperation and withstand external uncertainties together.

The Brazilian vice president, who is on a visit to China from Sunday to Friday, told Wang that his country is willing to promote the alignment of the Belt and Road Initiative (BRI) with Brazil's Investment Partnership Program and other development plans.

Proposed by Chinese President Xi Jinping in 2013, the BRI comprises the Silk Road Economic Belt and the 21st Century Maritime Silk Road, and aims to build trade and infrastructure networks connecting Asia with Europe and Africa along and beyond the ancient Silk Road routes.

Brazil wishes to increase its exports to China in an effort to diversify its trade, he noted, adding that his country welcomes more Chinese investment.

China has been Brazil's largest trading partner since it overtook the U.S. in 2009, and is also its largest export market and largest source of import.

Mourao said in a recent interview that Brazil has expectations for the BRI and is willing to hear China's advice on cooperation. He regarded the visit a chance to send a political message on Brazil's position on the BRI.

At the meeting on Thursday, the two countries agreed that they will continue to work closely in multilateral organizations and frameworks such as the United Nations, BRICS and the World Trade Organization, vowing to jointly safeguard multilateralism and free trade.

President Xi will also meet with Mourao during his tour, according to the Chinese Foreign Ministry.