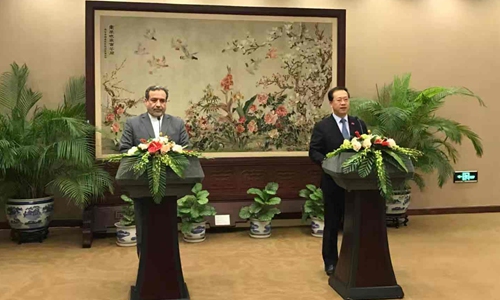 China and Iran have agreed to uphold the 2015 nuclear deal. The two sides reached several agreements on Sunday after the talks.

The Chinese diplomat says it's a question of multilateralism or unilateralism, and a choice between the rule of law or hegemony.

Ma said the root cause of the current crisis regarding the Iranian nuclear question lies with the US' withdrawal from the JCPOA, and its maximum pressure on Iran.

The US walked away from the historic nuclear deal in 2015.

Iran has since increased the number of nuclear equipment and facilities, and threatened to start using weaponry-level enriched uranium.

But Araghchi says Iran hasn't reduced its commitments to kill the deal, but rather to save it.

The two ministers at Sunday's consultation agree that Iran's reduction of commitments is actually reversible.

In October, Iran threatened to limit IAEA supervision of its nuclear program. But on Sunday, Araghchi said IAEA commissioners will carry on with their work.

China says it welcomes the gesture, and is calling on the agency to remain objective and fair in its work.


The Chinese foreign ministry has also called on European countries to speed up the implementation of INSTEX, a transaction tool initiated by the UK, France and Germany to bypass US sanctions on Iranian companies.