China is able to ensure food security for 1.4 billion people: Ministry of Agriculture 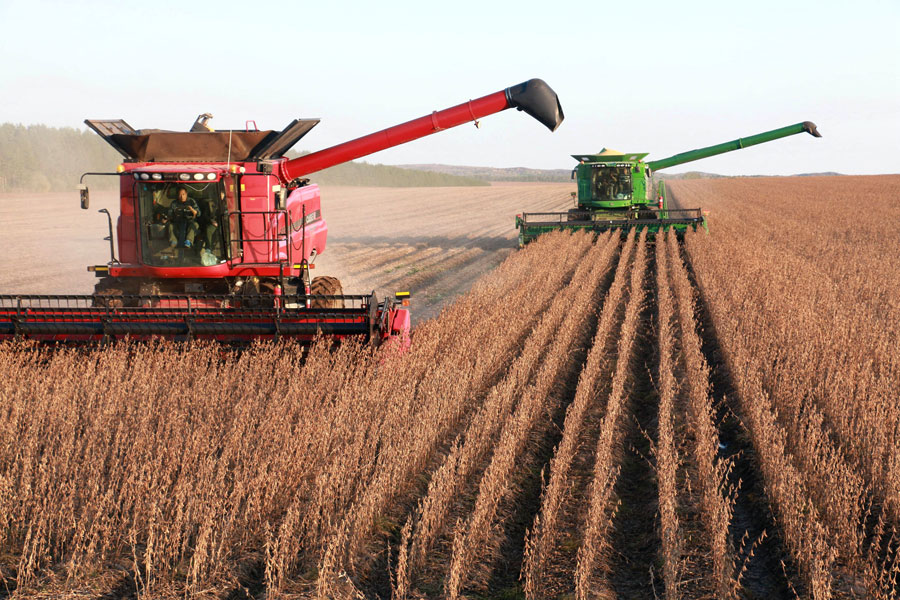 Soybeans are harvested in Heilongjiang province. [Photo by LU WENXIANG/XINHUA]

China's staple grain supply can be guaranteed with the country able to protect the "rice bowl" of 1.4 billion people, said Tang Renjian, minister of agriculture and rural affairs, at a press briefing on Monday.

However, Tang stressed that the country's grain supply at times comes under pressure, saying that domestic demand of grain will continue to rise in the long run due to population growth.To deal with current external uncertainties, "we should stabilize domestic grain output and food supply," he said.

He emphasized the country's ability to ensure food supply and other major agricultural products, including stabilizing grain growing acreage and improving the yield per unit area, accelerating the building of a modern breeding system and promoting green and healthy aquaculture.

Tang said that the country will take strict measures to safeguard a "red line" of 1.8 billion mu (120 million hectares) of arable land, while ensuring 1.55 billion mu of permanent basic farmland for plantation of staple foods like grains and vegetables as well as high-standard farmland .

The government's No.1 document for 2021 which was released on Sunday emphasized that efforts will also be made to strengthen the support provided to modern agriculture by science, technology and equipment, to establish 500 agricultural modernization demonstration zones by 2025, and to advance the green development of agriculture.

For the continuously rising pork prices since the outbreak of the African swine fever epidemic, Tang said that the most difficult period of live hog supply in China is over, and supply is expected to return to the level seen at the end of 2017 during the second quarter of this year.

Yang Taolin, deputy head of the ministry, said during the same conference that the country's vegetable plantation area for winter and spring season is 85 million mu now, which is 1 million mu compared with previous years.

"As the weather gets warmer, the country's vegetable output will gradually enter peak season and the output and supply of staple vegetables is guaranteed, with overall price level expected to trend lower," he said.

Yang Taolin said that the country will boost genetically modification technologies in agriculture in a safe and methodical way, complying with science and enhancing supervision and ensuring safety so as to allow modern agricultural technologies better benefit ordinary citizens.