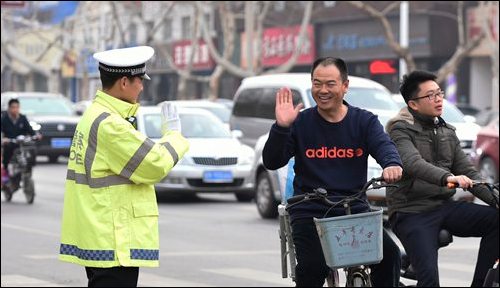 Wide use of smart phones and the internet is a double-edged sword for police.

On the evening of September 16, Lung Ying-tai, a Taiwan writer, saw a man slumped in the middle of a road in Shenyang city, capital of Liaoning Province, with his shoes scattered around.

The man looked in danger. "He was bleeding from the forehead, and his pants were drenched, which looked pretty horrible," said Lung.

Lung quickly reported the incident to the local police in a nearby police station to ask for help. Despite the positive response from the police, she did not fully trust the local police when she thought of the messages and videos circulating on the internet about the "police's brutality."

But when she returned, she saw the police "had helped the wounded man to the sidewalk and sat him on the steps, while patiently treating his wounds."

Lung admitted that the experience changed her previous stereotypes of mainland police.

The incident Lung described ignited heated discussions on Chinese social media over the difficult situation and dilemma facing Chinese police, who are supposed to serve the people.

"I am also a grassroots auxiliary police officer," a netizen named DX commented. "In such cases, I will assist the injured person immediately to avoid the occurrence of a second accident. There are many such good police in our country. News like this can change the minds of those who demonize us on the internet."

Police can be victims

Regular unpaid overtime, low wages and safety risks are all parts of the reality of being a Chinese police officer. However, police seem to have received more public scorn than respect in recent years due to allegations of police brutality.

Compared to their role as "violent law enforcers," few people seem to know from the media that they are also "victims of violent resistance."

In September 2017, video of a traffic police officer in Dalian, Northeast China's Liaoning Province, went viral on the internet because the officer repeatedly offered salutes to violators when asking for cooperation. Netizens praised his civilized manner in law enforcement, which is the opposite of police who enforce the law in a brutal and violent manner.

However, his soft way of enforcing law precisely reflects the panic and awkwardness of traffic police in performing their duties.

"Although punishment can be carried out, I try to avoid physical conflict," the police officer said in the video. "Because its consequence is beyond my control. If any accident happens, it will have a great impact on society, so I chose to salute and let the driver realize their mistakes from the heart."

The policeman was himself a victim of violent resistance. He was savagely bitten by a woman who parked illegally. He endured severe pain and had a rabies vaccine and continuous intravenous drip for many days.

In December 2017, cctv.com reported a take-away delivery man in Shanghai was stopped by a traffic officer. After receiving a fine ticket of 50 yuan, the delivery man threw the ticket on the ground. As a result, the police officer contacted the leader of his company, surnamed Gao.

Unexpectedly, Gao brought more than 20 other delivery men to the spot. He instructed his employees to film the police and stopped the police from seizing the deliveryman's electric scooter.

The Shanghai Huangpu People's Procuratorate initiated a public prosecution against Gao for creating a disturbance and putting pressure on the police officer.

Such confrontations reflect that some citizens regard the police as the enemy. This also contributes to the indecision and dilemma of Chinese police in law enforcement.

"For a long time, local governments have used the police as a tool to maintain stability and put them on the frontline once conflicts arise," Fu Dalin, a legal commentator, said in a commentary published in the Beijing Times in May 2016.

As a result, the tensions between police and the people intensified.

A policeman from Beijing who refused to give his name told the Global Times that the pressure from public opinion is very large nowadays. He added that the job is more tiring than before.

The pressure from public opinion requires police not only to pay attention to a proper appearance, but also to using professional words in a mild manner. Any words that irritate the public may bring a complaint against an officer.

Even though there is no big influence on their career, police officers have to write a report of self-review after each complaint.

"We will try our best to avoid trouble whenever possible," he confessed, adding that most police have the same mentality.

Wei Yongzhong, a professor from the People's Public Security University of China, told the Global Times that with the rise of social media in recent years, police have become more cautious about what they say and do. Such concerns sometimes affect the decisiveness of policing at the grassroots level.

In May 2018, a video of a Shanghai traffic police officier following a very professional procedure to enforce the law received applause across Chinese social media.

Facing resistance from a noncompliant driver who operated a car without a legal plate, traffic police fiercely issued a stern warning, ignoring the invective and provocation of the lawbreaker. After three warnings, traffic police immediately subdued the lawbreaker. The traffic police officer kept reminding bystanders to get out of the way throughout the whole process. A woman accompanied the lawbreaker kept yelling, "Police are beating people up. Come here to take photos," and calling the police "insane."

After the video of the incident went viral online, approval of the police conduct dominated the comments. People approved the police's professional behavior and strong attitude.

"We are thankful for the video recording. The woman who accused the police of brutality is the kind of person who demonizes the image of our police," a comment said.

Wei said to the Global Times, "This shows the public's expectations and requirements of law enforcement departments to enforce laws in a standard and civilized way. It also reflects the people's call for rules. Concise but powerful language, and procedural standardization will become a trend."

The draft specifies that the authority of the police should be guaranteed in violent attacks like being hit, rolled, dragged, or smashed by vehicles or being obstructed or crushed by people. Being detained, bitten or pulled should also be protected, the draft stipulates.

The draft also says that police should not be punished for their law enforcement behavior without due legal procedures.

The release of a draft regulation to maintain the authority of on-duty police officers will improve the working environment for grassroots officers, Chinese experts asserted on Wednesday.     Chinese people sometimes lack legal consciousness, and "attacks on police are not rare," said Su Wei, a professor at the Party School of the Chongqing Municipal Party Committee.

In 2016, the Ministry of Public Security stressed at a national public security training session that the public is allowed to film how the police behave if it doesn't influence their work. Moreover, it says police must accept public supervision and cannot intervene in public filming - they must get used to being under the gaze of the camera during law enforcement.

Keeping a record of the law enforcement process is seen as a protective measure for both the police and the person being arrested.

Wei believes the wide use of smart phones and the internet is a double-edged sword for police.

"On one hand, it can easily help footage of a single bad or violent action quickly spread and accelerate its negative impact. On another, it intensifies the public's power of supervision, pushes police to improve law enforcement, and promotes justice and equity," Wei said.

He said people's awareness of their rights and interests have grown, but their respect for the law and consciousness of their legal obligations are still lacking.