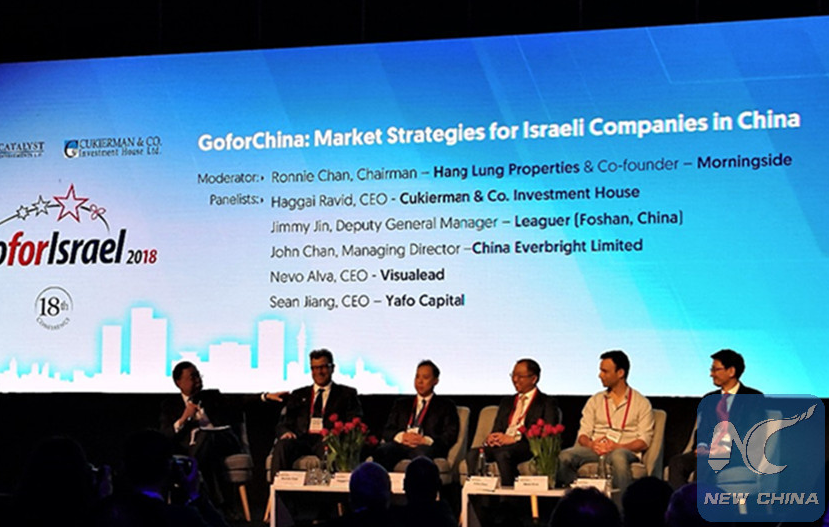 Participants from Israel and China attend a special panel discussion on China-Israel business cooperation at the GoforIsrael annual business conference that opened in Tel Aviv, Israel on March 5, 2018 (Xinhua/Chen Wenxian)

At the GoforIsrael annual business conference held in the Israeli city of Tel Aviv, Chinese and Israeli business leaders were thrilled by the bright prospect of future cooperation in various fields, especially the high technology sector.

The two-day conference, which opened Monday, brought together about 1,000 business leaders, investors and entrepreneurs from Israel, China, the U.S. and Europe.

Many Israeli hi-tech companies showcased at the conference their latest innovations in areas such as information technology, life sciences and healthcare, cyber security, energy and advanced manufacturing. They hope to attract Chinese investors who hope to profit from the growing demand for high technologies and innovations in China, the fastest growing economy in the world.

A number of Chinese and Israeli companies have already successfully joined hands in the hi-tech sector, as more and more platforms have been established to serve as bridges to connect the two sides. GoforIsrael is one of such platforms.

"China is the right partner for Israel. Our capabilities and China's opportunities are really complementary like gloves to a hand," Yanir Shamir, a former agriculture minister of Israel, told Xinhua in an interview.

For Chinese companies, they have made investment not only in Israel's infrastructure projects, but its hi-tech R&D centers and start-ups. On another hand, Israeli companies are also going eastward to China.

In November 2017, a total of 15 Israeli companies from the fields of information and communications technology (ICT) and life sciences completed successfully a roadshow in China.

"China is also developing fastly in technology and it has also big markets," said Shamir, who is also the managing partner of Catalyst Funds, one of the organizers of the two-day conference.

"I am very optimistic about the relationship between China and Israel," he added.

At the special panel themed "GoforChina: Market strategies for Israeli Companies in China," some senior executives of Israel companies shared their experience of cooperating with Chinese companies and investing in China.

Ravid, who lived in China's eastern province of Jiangsu over the past three years, has achieved great success in facilitating transactions between China and Israel.

The Chinese government is encouraging domestic companies to make investment in manufacturing and hi-tech fields overseas, while actively attracting foreign investment to China, he noted.

In addition to big cities such as Beijing, Shanghai, Guangzhou and Shenzhen, many medium-sized cities in China are also very strong in technological innovation as a result of attracting foreign investment.

When it comes to the Internet, China is already way ahead with such world class companies from Tencent to Baidu, he said.

So, there is much more room for the China-Israel cooperation in the fields of robots, automotive, healthcare, medical and biological technologies, Ravid said.

John Chan, managing director of the M&A department of China Everbright Limited, a Hong Kong-based financial services company, said there is a bright prospect for Chinese companies and investors to cooperate with Israeli counterparts and invest in Israel.

As Israeli companies are seeking new partners and establishing production bases in China, it is expected that the Israeli investment in China will also grow fastly in the future, Chan told Xinhua.

The IVC Research Center, a leading institution that provides insight into Israel's hi-tech industry, said in a report that Chinese direct investment, mergers and acquisitions, and buyout activities made up about 5 percent of Israel's total investment in 2017.

Ravid expected that figure to gradually grow to 10 percent and even 20 percent in the future.