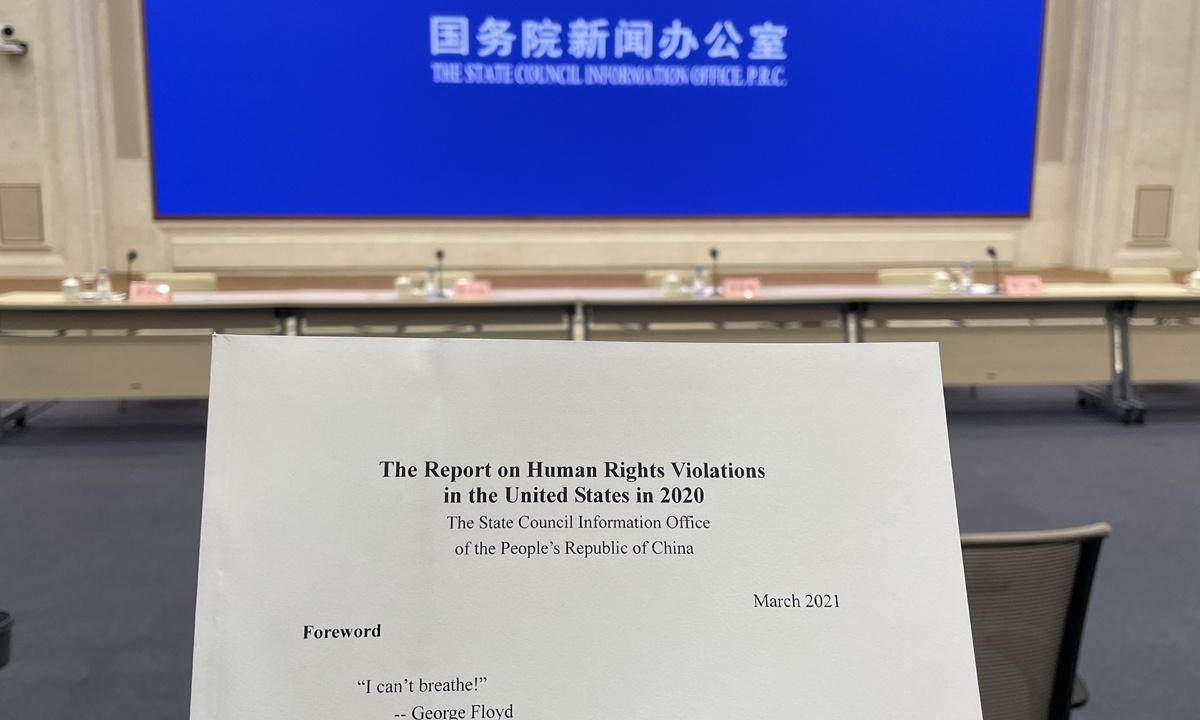 The Report on Human Rights Violations in the US in 2020 (Photo: GT)

China published its annual US human rights situation report on Wednesday at a time when the US-led ideological battle against China has intensified, mainly over Xinjiang and other domestic issues.

By highlighting the COVID-19 turning into a human tragedy, disorder in American democracy vividly reflected in the Capitol riots, and recent growing discrimination against ethnic minorities including Asian Americans, China slammed the US' terrible human rights record, which makes its remarks on other countries' human rights situation pure "hypocrisy and double standards."

In seven major chapters, the 15,000-word report started with the now well-known line "I can't breathe!" made by George Floyd, an African American, before he died after a white police officer kneeled on his neck, sparking a national outcry. However, the most striking deterioration in the human rights situation amid COVID-19 in the US was due to a failure of governance, the report said.

The epidemic went out of control and turned into a human tragedy due to the US government's reckless responses, it noted. By the end of February 2021, the US, home to less than 5 percent of the world's population, accounted for more than a quarter of the world's confirmed COVID-19 cases and nearly one-fifth of global deaths from the deadly disease. More than 500,000 Americans lost their lives due to the virus.

Compared with previous reports, this year's report highlights China's definitions of human rights, which put human life and health as a priority, Chang Jian, director of the Research Center for Human Rights at Tianjin-based Nankai University who is one of the report's drafters, told the Global Times on Wednesday.

It offsets previous definitions of human rights dominated by US-led Western society which stressed merely respect to human rights while making little actions. However, after having gone through the COVID-19 pandemic, people in the world began to realize that China has not only respected, but more importantly, safeguarded human rights with active actions, Chang said.

China usually issues the annual report on the US human rights situation in response to the US' annual reports on human rights practices issued by the US Department of State every year. But this year, in an increasingly complex geopolitical environment, the Chinese government took the initiative in issuing its report first, given the increased human rights violations in the US due to chaotic pandemic control and prevention measures, the arrogance and irresponsibility of the country's leaders, growing political polarization, record-high levels of discrimination, hate crimes and gun violence, according to the experts who drafted the report.

The Report on Human Rights Violations in the US in 2020. (Graphic: GT)

Issuing this report is not to interfere in the US internal affairs, it is like at the UN Human Rights Council every country can evaluate another country's human rights situation. Why have we become outspoken on this matter? Li Xiaojun, director for publicity at the Bureau of Human Rights Affairs of the State Council Information Office, told a press conference for unveiling the new report on Wednesday.

"We welcome other countries to comment on our human rights situation in a constructive manner, but US makes some comments on China's human rights issues based on lies and rumors, in an attempt to fulfill its geopolitical goals, which is not acceptable," Li said.

Li Yunlong, a professor with the Party School of the Central Committee of the Communist Party of China, echoed Li Xiaojun's view. Li Yunlong said at the press conference that the US likes to point a finger at other countries on human rights, but ignores its own problems including rising gun violence with gun sales and shootings hitting a new record in 2020. 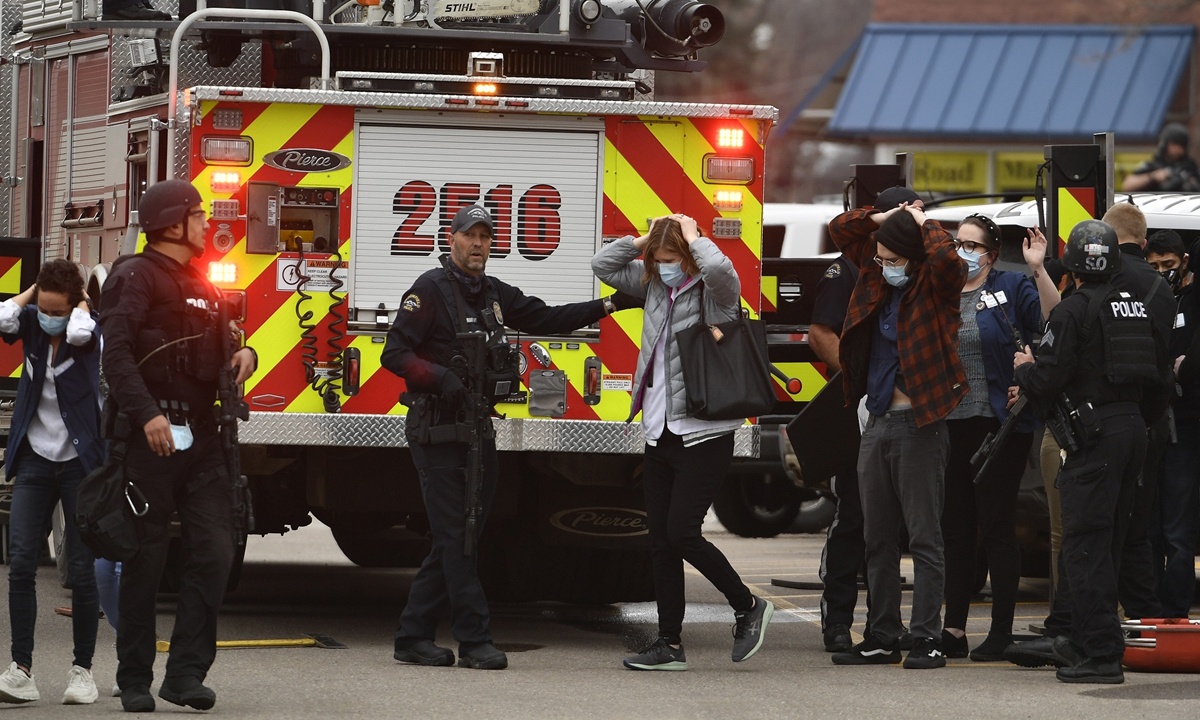 People who were inside the King Soopers supermarket come out of the store with their hands on their heads escorted by police and SWAT members after a mass shooting on Monday in Boulder, Colorado, US. The gunman killed 10 people, including a police officer who responded to the shooting. (Photo: VCG)

Just on Monday, a new shooting incident took place in Colorado, causing the deaths of at least 10 people, even as the Atlanta shootings - with eight deaths - were still haunting the nation.

Americans bought 23 million guns in 2020 against the backdrop of an out-of-control epidemic, accompanied by racial justice protests and election-related conflicts, a surge of 64 percent from 2019, according to the report.

The report also came out in the midst of an intensive US-led sanctions war against China on human rights, as Washington ganged up with its allies including the European Union, the UK and Canada in imposing punitive measures on Beijing with the pretext of the so-called human rights abuses in Northwest China's Xinjiang Uygur Autonomous Region. In response to such reckless and unilateral actions, China responded with firm countermeasures, slamming EU individuals and entities that have spread rumors and lies about Xinjiang.

"The report shows China is breaking the West's monopoly on human rights discourse and is redefining the international discourse with solid facts and data," Chang said.

On Tuesday, China and Russia issued a joint statement, condemning the practice of "politicizing human rights issues" and "interference in the internal affairs of sovereign states under the pretext of 'promoting democracy.'"

Some observers considered that a major reason behind the serious turmoil and even fragmentation of the current international system was that Washington, along with its major allies, have defined human rights and democracy with a set of values that can be used as leverage to consolidate Western hegemony with the US as its center. They use this tactic to impact the governance of developing countries like China, and the US even attacks these countries as part of their strategic games.

China has never gone against the world's core definition of human rights, but has developed and enriched the definitions, and China's redefinition is expected to become a major force in restoring international discourse, Chang said.

When the US-led Western public opinion criticized China on the so-called genocide in Xinjiang, the US was the one that has carried out systematic ethnic cleansing and massacres of Indians in history. And American Indians still live like second-class citizens today and their rights have been trampled on. For example, some live in low-income communities in the US, suffer higher rates of cancer and heart disease from toxic radioactive environments, and many live near hazardous waste disposal sites and have an abnormally high rate of birth defects.

"The modern history of American Indians in the US is actually a history of genocide," Li Yunlong told the Global Times during the press conference.

As China is taking more initiatives in demonstrating a shared consensus on this question with more countries other than the US and its allies, which has become a major point in the geopolitical battle today, some observers called for human rights to be redefined instead of following the US-led West hegemony.