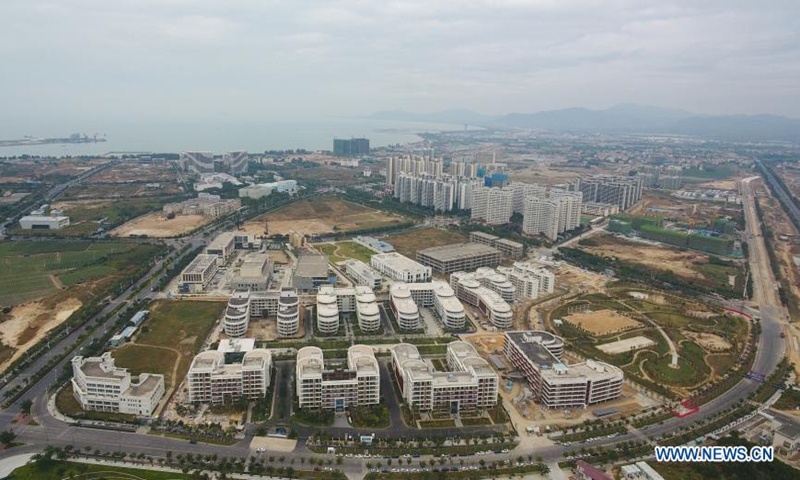 Aerial photo taken on Jan. 6, 2021 shows the Yazhou Bay Science and Technology City under construction in Sanya, south China's Hainan Province. The science and technology city is expected to give technological momentum to the construction of the Hainan free trade port. (Photo: Xinhua)

The guideline, jointly released by the National Development and Reform Commission (NDRC) and the Ministry of Commerce, detailed measures to innovate market access in the pharmaceutical and heath sectors, optimize financial market entries and development environment, and promote wider entries in the fields of culture and education.

To optimize market access in the financial sector, efforts will be made to support the development of securities, insurance and funds in the province.

In terms of boosting entries in the cultural field, market access in the cultural relics sector will be widened, and Hainan will be supported to develop the industries of cultural performances and online gaming, the guideline noted.

Efforts will also be made to widen access in the field of education, and prestigious universities in the country will be supported to set up international colleges in Hainan.

Entries to civil aviation, sports and seeds markets in Hainan will be eased, according to the guideline.

Xu Shanchang, an official with the NDRC, hailed the guideline's measures in fields including online sale of prescription drugs, commercial aerospace and new energy infrastructure as trailblazing.

The efforts are expected to revamp industrial access and supervision mechanisms, and form a more vibrant climate of reform and innovation in the construction of market access system of the country as a whole, Xu said.

The guideline, a brand-new institutional arrangement, will generate new major policy dividends to support the construction of Hainan free trade port, he said.

China released a master plan for the Hainan free trade port on June 1 last year, aiming to build the province into a globally influential, high-level free trade port by the middle of the century.